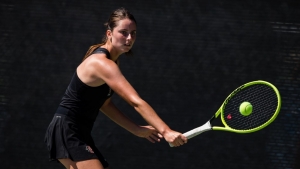 In doubles play, senior Magda Aubets and freshman Shakhnoza Khatamova put together a swift 6-2 victory over Shweta Kumar and Anu Bhadada in the third seed, while senior Jenny Moinard and junior Mia Smith had a similar outcome on court two, going 6-2 against Alexandra Weil and Madison Hale to clinch the doubles point for SDSU.

The Aztecs remained dominant in singles action with Khatamova drilling out a 6-2, 6-1 finish over Ashley Chao in the top seed, while sophomore Nnena Nadozie captured a 6-1, 6-1 decision over Becky Chou in the third seed. On court No. 5, freshman Alicia Melosch celebrated a 6-2, 6-2 win against Bhadada to clinch the match for San Diego State.

The two teams played out the remaining matches on courts four, two and six, where Aubets logged a 6-1, 6-2 victory over Kumar in the No. 4 position, Moinard finished 6-3, 6-1 against Weil on court two, and freshman Agustina Rimoldi Godoy finished off a 6-3, 6-1 match against Hale.

The Aztecs held the Tritons scoreless for a second time this season, first downing UCSD 7-0 on Jan. 26, 2019.

San Diego State (13-9, 3-1 MW) prepares to host the 2019 Mountain West Women’s Tennis Championships next Wednesday through Saturday, April 24-27, at the Aztec Tennis Center. A full bracket will be announced by the conference next week.