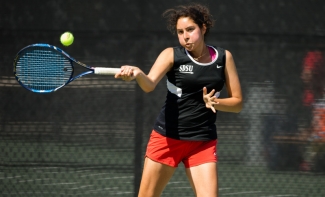 September 30, 2017 (San Diego) - The Aztec women’s tennis team wrapped another day of its SDSU Fall Classic I with six total victories, four in singles play and two in doubles matchups. The team is set to participate in the final day of the tournament tomorrow at the Aztec Tennis Center.

SDSU went two-and-one in doubles play on Saturday, beginning with a 6-3 victory for senior Paola Diaz and freshman Abbie Mulbarger over USD’s Daniela Morales and Gemma Garcia in the red championship draw.

Junior Jenny Moinard and sophomore Mia Smith were hoping to repeat their day one success, but ultimately gave way to USD’s Sophia Chow and Maria Paula Torres in a tight 7-6(4) match in the gold championship bracket.

The Aztecs entered day two of singles play looking to build off their success from day one, and continued the winning trend in the red singles bracket. In the championship draw, freshman Nnena Nadozie earned a three-set victory over USD’s Chow, 6-3, 2-6, 6-1, while Aubets took her opponent, Laura Malsurt of SJSU, to three sets for a win in the consolation bracket, 0-6, 6-3, 7-6(5).

SDSU was less fortunate in the three other singles draws, where Acero stumbled against UTEP’s Erandi Martinez, falling 6-2, 6-3 in the white championship bracket. In the gold draw, Smith was unsuccessful against her opponent, dropping a close 6-2, 4-6, 7-6(6) decision to SJSU’s Clara Mantaux in the championship bracket. Though she took her challenger to three sets, Diaz was also unable to walk away with a win, handing USD’s Garcia a 6-1, 3-6, 6-4 victory.

The Aztecs close out the final day of play tomorrow at the Aztec Tennis Center. Doubles play is set to begin at 9 a.m. and singles matches will immediately follow.