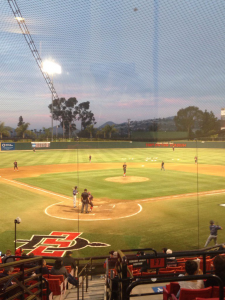 May 13, 2016 (San Diego) - The struggling Aztecs baseball team looked to end its home season on a strong note in its series against Air Force.  Dominic Purpura got the start for SDSU against Ethan Nichols for Air Force.

They did a pretty good job of that in the first.  With the bases loaded, Tyler Adkison was hit by a pitch and Spencer Thornton hit a sacrifice fly and the Aztecs took a 2-0 lead.

In the second, Shaun Mize hit a sacrifice groundout and the Aztecs’ lead was cut to 2-1.

In the fifth, Adam Grosbeck singled and drove in a run to tie the game at two.

In the Aztecs’ half of the fifth, Alan Trejo hit a lined shot into right to drive home a run and the Aztecs retook the lead 3-2.

In the eighth, Justin Wylie lined it into center sharply to score another run and the Aztecs took a 4-2 lead.

The Aztecs have a doubleheader tomorrow with the first pitch of the first game at noon.