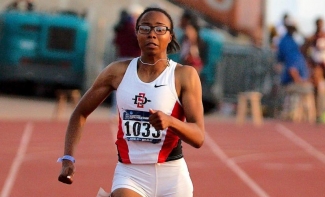 June 24, 2017 (Sacramento) - San Diego State track and field junior Simone Glenn competed in the first round of the 200 meters and alum Allison Reaser is ninth midway through the heptathlon on the third day of the USA Outdoor Track and Field Championships.

Her first senior national championship saw Glenn place 30th in the 200, clocking in at 23.93. The Atlanta native concluded her third season in the Scarlet and Black by earning a pair of All-American honors, picking up the accolade in the 4x100 (first team) and the 200 (honorable mention).

Fellow alum Shanieka Thomas will appear in the triple jump at the Jamaican Senior National Championships tomorrow at 2:00 p.m.