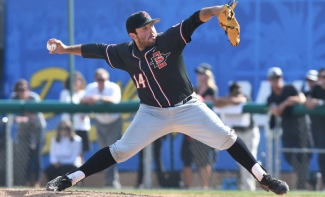 June 4, 2017 (Long Beach) - San Diego State kept Its Regional hopes alive as it defeated UCLA 3-2 in 13 innings Saturday afternoon at Blair Field in Long Beach, Calif. SDSU’s winning run came in the top of the 13th when Danny Sheehan was hit by pitch with the bases loaded.

With the victory, the Aztecs improved to 42-20 on the year. The loss eliminated the Bruins from the tournament as they finish their 2017 season with a record of 30-27.

SDSU got on the board first with a pair of runs in the top of the second inning. Singles by Andrew Brown and Andrew Martinez plus Jordan Verdon being hit by pitch loaded the bases with one out. Dean Nevarez then hit a sharp grounder that hit UCLA pitcher Jon Olsen on the leg and rolled between first and second for a hit to bring home Brown with the opening run. Tyler Adkison then hit a sacrifice fly to center that scored Martinez to make it a 2-0 contest.

Aztec starter Dominic Purpura got through the first three innings before UCLA scored its opening run in the bottom of the fourth. The run came thanks to a one-out double by Michael Toglia and a two-out RBI single by Jake Hirabayashi.

For its part, SDSU did little offensively after scoring twice in the second. Olsen retired 14 in a row after Nevarez’s single in the second, a string that ended with a walk to David Hensley to open the seventh. A single by Chase Calabuig with two out in the eighth was the only other base runner the Aztecs would have through the 11th inning.

Olsen’s afternoon ended with the single by Calabuig in the eighth, but reliever Jake Bird proved just as effective against the Aztec hitters.

UCLA would tie the game in the bottom of the eighth. A two-out single by pinch hitter Jack Stronach brought home the tying run from second base. That game-tying hit came against reliever Jorge Fernandez with the run charged to Marcus Reyes, who had come on with one out in the fifth.

The Bruins had a golden opportunity to win the game in the bottom of the ninth after loading the bases on an error and two intentional walks that came around a sacrifice bunt.

Aztec closer CJ Saylor was called from the bullpen, and the senior right-hander recorded a strikeout and a foul pop up to end the threat. He would go on to pitch the final 4.2 innings, allowing two hits and two walks while striking out four. It was his longest outing of the season as he would pick up the victory to improve to 3-0 on the year.

SDSU’s 13th inning began with Dean Nevarez reaching on an error and advancing to second on Julian Escobedo’s single to left. Both runners moved up a base on Alan Trejo’s sacrifice bunt before a walk to Calabuig loaded the bases.

UCLA brought on closer Scott Burke, but his first pitch hit Danny Sheehan, forcing in what would prove to be the winning run. It was the 15th time this season that the Aztec shortstop has been hit.

Saylor then wrapped up the win, retiring the first two Bruin hitters in the bottom of the 13th before surrendering a single and then getting a fly ball to right to end the contest.

San Diego State will now face Long Beach State again with their next game scheduled for 1:00 p.m. PT on Sunday (June 4) in an elimination game.