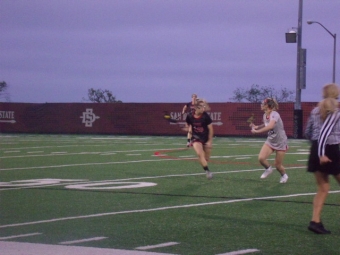 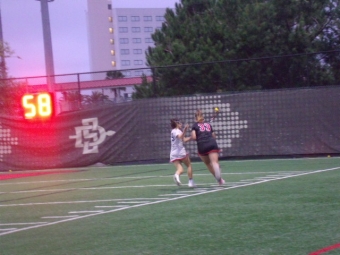 SDSU struck first early in the first half after a number of good chances.  The Flames tied it soon after on redshirt junior Faith Wells’ line-drive shot.  Junior Grace McGinty reclaimed the lead for the Aztecs a few minutes later with a top shelf goal.  But sophomore Carly White tied it up for Liberty again and the back and forth continued.  The Aztecs reclaimed the lead a minute later and this time, they increased it on a goal by junior Jill Haight.  Liberty added one more before the half was out, but the Aztecs held on to a 4-3 lead at halftime.

Liberty sprinted out of the gate in the second half, with junior Brianna McCaffrey’s unfair goal right down the middle tying the game.  But sophomore Taylor Sullivan slowed them down just a bit to get the lead back for the Aztecs.  Sophomore Morgan Taylor went top shelf to extend the lead.  White made it a one-goal game again on a penalty shot, but the Aztecs took a timeout, which helped, because immediately afterward, Taylor put them up by two again with a bullet of a shot.  Junior Harlowe Steele gave the Aztecs their biggest lead of the night at three with a goal.  White cut it back to two.  Haight brought it back to three.  McCaffrey went low left to bring the Flames’ deficit back to two.  The Aztecs reached double digits and regained a three-goal lead with around five minutes left.  They reached their biggest lead of the night (four) a minute later.  Liberty freshman Mia Toscano made it three again on a penalty shot.  Another Flames goal made the lead two.  Toscano and the whistle-crazy ref were having their way as Toscano’s goal made it a one-goal game again.  But the ref eventually let the game end (weird) and the Aztecs escaped with a narrow 11-10 victory. 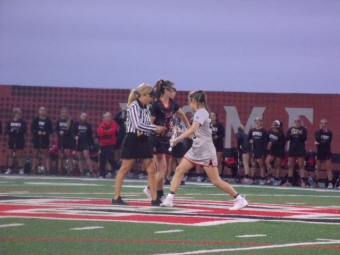 SDSU lacrosse travels to Delaware on Tuesday.  First draw is set for 1:00 p.m.

Close game, must have been fun to watch. Thanks Liz, for sharing your love of sports!