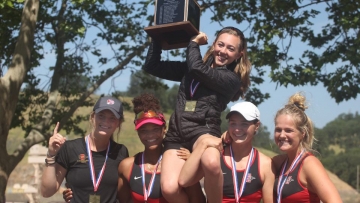 April 30, 2019 (San Diego) - The San Diego State rowing varsity four, which includes Helix High School graduate Deborah Worthey, has been named American Athletic Conference Boat of the Week, the league office announced Tuesday. This is the first weekly conference honor for an Aztec crew this season and just the third time an SDSU boat has been selected since the program joined the conference in 2014.

The V4 boat earns the accolade following a stellar performance at last weekend’s Western Intercollegiate Rowing Association Championships on Lake Natoma in Gold River, Calif. The crew competed in a preliminary race on Saturday in variable headwinds, and still managed a first-place time of 7:39.760, a five-second lead over the nearest finisher, Loyola Marymount. The prelim event – which was a race for lanes for Sunday’s final – also featured crews from University of San Diego, University of Portland, conference foe Sacramento State, Stanford Lightweight and Saint Mary’s.

Sunday’s final was an even greater success for the varsity four crew, who shaved nearly 13 seconds off their prelim time, completed the course in 7:26.851 to take home gold. The Aztec V4 finished ahead of its six prelim competitors and cleared second by a margin of three seconds.

Up next, the San Diego State rowing squad will scrimmage this Saturday, May 4 against USD and UCSD as the team prepares for The American Conference Championship, which is set for Sunday, May 19 in Oklahoma City, Okla.