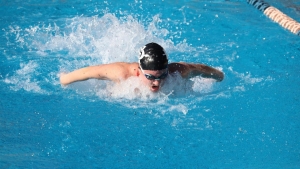 SDSU continued its dual meet win streak, now up to 24

Friday’s action started with a podium sweep on the 1m springboard, led by junior Lexi Letts with a first-place score of 259.80. Fellow juniors Ximena Lechuga Gonzales and Gina Cazares rounded out the Aztecs’ top-finishes as Lechuga Gonzales placed second with a score of 244.72 while Cazares totaled a bronze-medal effort of 232.19 points.

Kicking off the swimming portion of the day was the top finish of the Aztecs’ 400-medley relay squad of sophomore Riley Tapley, junior Sammy Geyer, junior Lizzie Menzmer, and senior Elli Ferrin.  The quartet touched the wall first with a time of 3:58.35. SDSU’s ‘B’ squad of sophomore Evonne Stehr, senior Larisa Tam, and freshmen Jessie McMurray and Alex Gershman finished right after their teammates, placing second with a mark of 4:04.78.

Sophomore Paige Mitchell earned the first individual swimming event win of the day, topping all competitors in the 300 free with a time of 3:03.29. Rounding out the top-three finishers in the event was sophomore Christy Neufield, touching the wall at 3:10.33 for third place.

Freshman Emma Willmer finished second in the 400-individual, her first taste of collegiate competition in the event, earning a time of 4:45.00.

Tapley captured her first individual win of the day in the 50-yard back, besting the competition by .5 seconds with a top finish of 27.01. Stehr finished in second with a time of 27.56.

McMurray earned a top-three finish in the 100-individual medley, finishing second with a time of 1:02.52.

The Scarlet and Black ended the day with wins in all four final events, as the 800-free relay of Neufeld, Willmer, freshman Ashlyn Hemphill and Mitchell touched the wall first with a time of 7:59.79, and Menzmer earned her first individual top finish of the day in the 50 fly with a time of 25.97. With the dual captured after event eight, the Aztecs exhibitioned all swimmers on the final two events.

While not officially topping the charts in the events, Geyer earned the top time in the 50 breast with a time of 30.10. The Aztecs ‘A’ 200-free relay squad also collected the fastest mark in the final swim of the day, finishing just .02 seconds ahead of the ‘B’ squad with a time of 1:38.06.

SDSU heads further up the coast to take on the Cal Poly Mustangs Saturday, Jan. 16. The dual begins at 9:30 a.m. at the Anderson Aquatic Center in San Luis Obispo, Calif.