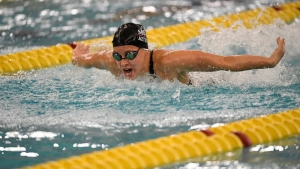 Thursday morning's preliminary heats kicked off with freshman Mia Ryan and sophomore Milena Karpisz earning third and eighth-place marks in the 500 Freestyle to move on to the A finals, touching the wall at 4:51.52 and 4:53.71, respectively. Both swimmers shaved at least half a second off their preliminary marks Thursday night, with Ryan placing tied-for-fourth overall with a time of 4:50.60 and Karpisz grabbing sixth with a time of 4:50.72.

The Aztecs dominated the 200 individual medley preliminary heats, as sophomore Kristina Murphy and seniors Courtney Vincent and McKenna Meyer headed to the A finals finishing first, third and fourth in the qualifying heats. The finals saw Vincent jump to top the podium with a career-best effort of 1:59.03, the third-best swim in program history and the tenth-fastest time in conference laurels. Murphy earned a bronze finish with a time of 1:59.16 with Meyer finishing just behind her in fourth with a time of 1:59.75. All three Aztec swimmers' marks qualify as NCAA 'B' cut performances.

SDSU closed off Thursday with the final individual swimming event of the day, the 50 Free, sending four swimmers onto the 'A' finals- junior Klara Thormalm, senior Alma Thormalm, and sophomores Lizzie Menzmer and Sammy Geyer. The Aztecs swept the podium in the finals as all three swimmers finished with 'B' cut marks-- Klara in first with a time of 22.41, Menzmer in second touching the wall in 22.42, and Alma in third with a swim of 22.55. Geyer placed fifth with a time of 22.80. Senior Peyton Wilson swam in the consolation finals with an 11th-place finish in prelims, finishing second (10th overall) in the night's finals heat with a time of 23.01.

On the springboard, sophomore Ximena Lechuga Gonzalez and Marie Yacopino earned spots in the 3-meter finals, placing fourth (330.65) and seventh (317.95) in the qualifying heats, respectively. Junior Eric Sarver finished 14th with 277.35 points in the prelims and followed her efforts with a sixth-place finish in the consolation finals, earning a score of 281.95.

The finals saw the sophomore leap three spots to top the podium with an Incredible performance, scoring 382.35, less than a point off her SDSU record-setting effort against the University of San Diego, Jan. 24. Yacopino also earned a spot on the podium with a third-place six-dive total of 358.10.

The Scarlet and Black closed out day two with a win in the 400 medley relay, finishing their swim in 3:33.64. It marked the second-fastest effort in program history and qualified for the NCAA Championships as a 'B' cut time.

Competition continues tomorrow at 11 a.m. CT/9 a.m. PT with the 400 individual medley preliminary heats. Live results can be found here, while a live stream hosted by FloSwimming is available here.