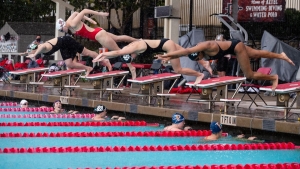 UNLV, Nevada and San Diego State were separated by just 40 points in the final tally

February 20, 2021 (Las Vegas/Colorado Springs) - The San Diego State swimming and diving team earned a third-place finish at the 2021 MW Championships Saturday, falling to first-place UNLV by 40 points and second-place Nevada by just 31 points. For her efforts throughout the meet, Klara Thormalm was named 2021 Mountain West Championships Swimmer of the Meet.

Going into the day with a slight lead over the field of competition, the Aztecs saw strong morning swims from Jim Reitz Pool in Las Vegas, Nev. In the 200 back, sophomore Riley Tapley earned the best time in prelims with her 1:58.08 qualifying swim. The Aztecs sent two swimmers to the consolations finals as freshman Alex Roberts placed ninth in the preliminary heats with a time of 2:02.24 while senior Elli Ferrin finished 16th with a time of 2:04.77. Junior Evonne Stehr snagged a spot in the bonus finals with a 19th-place effort in the prelims, recording a time of 2:05.65.

Juniors Mia Ryan and Sammy Geyer led SDSU’s efforts in the 100 free, each qualifying for the championship finals with fourth and fifth-place swims of 50.40 and 50.51 in the preliminary heats, respectively. Fellow junior Menzmer earned a spot in the ‘C’ finals with the 23rd-best time in the qualifying heats, touching the wall with a time of 52.27.

The Aztecs continued their domination in the breaststroke events as the Scarlet and Black snagged four spots in the night’s finals in the 200 breast Friday morning. Senior Klara Thormalm swam the second-best prelims time of 2:12.05 and junior Kristina Murphy placed fourth in the qualifying heats with a time of 2:14.19 to secure two lanes for the Aztecs in the championship heat. Freshman Emma Willmer and senior Larisa Tam each earned the chance to swim in the bonus finals with their preliminary heat swims, as Willmer recorded a time of 2:22.80 and Lam finished right behind her with a time of 2:25.83.

Closing out the morning’s swimming events was the 200 Fly, as freshman Wilma Johannson led all Aztec swimmers with a seventh-place finish in prelims with a time of 2:03.12. Sophomore Paige Mitchell swam into the consolation finals with a time of 2:044.88, good for 10th in the qualifying heats. Sophomore Emily Gebhardt and freshman Fiona Trotz-Chavez rounded out the Scarlet and Black’s qualifiers for Saturday night’s finals, finishing 18th and 22nd with times of 2:08.19 and 2:13.33, respectively.

On the springboard, four Aztecs moved onto the finals in the platform diving event as juniors Ximena Lechuga Gonzalez, Gina Cazares, senior Erica Sarver, and freshman Jules Harrison each finished in the top-16 with their preliminary heat dive scores. Moving onto the championships were Lechuga Gonzalez and Cazares, as Ximena finished second in the prelims with a score of 238.25 and Gina finished fourth with a score of 213.35. Sarver and Harrison earned 14th and 15th in the qualifying heats with scores of 188.95 and 188.45, respectively, good for spots in the consolation finals. In the consolation finals, Sarver improved her finish by four spots with her finals effort, scoring 217.80 for second in the 'B' finals and 10th overall. Harrison ended her first conference championships with a 16th-place overall finish with a performance of 174.60 points. In the championship finals, Ximena held her preliminary rankings and earned a silver medal with a score of 259.45 while Cazares finished sixth with a score of 225.00.

The night’s final events were kick-started by Ferrin’s 200 back consolation effort, cutting 4.94 seconds off her prelims time to finish first in the ‘B’ finals with a time of 1:59.83, ninth overall. Roberts finished just after her veteran teammate, cutting 1.83 seconds off her qualifying mark to finish in 10th place with a time of 2:00.41.  Tapley recorded the Aztecs’ first swimming podium-finish of the night in the championship finals, earning a bronze medal with a time of 1:57.48, good for the fourth-best swim in SDSU history.  Stehr won the bonus heats with another incredible swim, cutting 4.96 seconds off her prelims time with a swim of 2:00.69 for the top finish in the ‘C’ finals and 17th place overall.

Geyer added the second top-three finish for the Aztecs, finishing third in the 100 free with a time of 50.28. Ryan finished just behind her with a time of 50.71, good for sixth overall. Menzmer held her ranking from the prelims, cutting .22 seconds off her morning time for a 23rd-place swim of 52.05.

The Aztecs closed out their time in Las Vegas with a third-place finish in a tightly contested 400 free relay, touching the wall at 3:21.20, good for the 10th-best relay time in SDSU laurels. Just .11 seconds were separating the top-three finishers in the relay event.

SDSU’s divers now prep for the 2020 NCAA Zone E Diving Championships, held March 8-10, while the Aztecs’ swimmers who swam NCAA ‘B’ cut marks throughout the season wait to see if they earned spots in the 2021 NCAA Championships. Swimmers donning the Scarlet and Black that did not compete in the MW Championships head to Las Vegas, Nev. Feb. 25-28 for the Mountain West Conference Invitational.

Swimmer of the Meet

Diver of the Meet

Freshman of the Meet