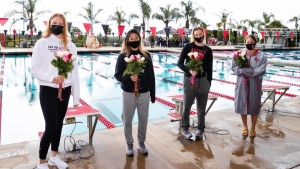 January 29, 2021 (San Diego) - The San Diego State swimming and diving team concluded their regular-season home dual meet slate with a 140-111 win over Pepperdine on Friday, Jan. 29. The senior-day victory is the Aztecs’ 26th consecutive dual meet victory dating back to 2018.

SDSU kicked off the day with a one-two sweep of the 200-medley relay. The Aztecs’ A quartet of seniors Elli Ferrin, Klara Thormalm, Larisa Tam, and junior Lizzie Menzmer finished with the top time of 1:46.00, while the ‘B’ relay team of freshman Fiona Trotz-Chaves, Jessie McMurray, Alex Gershman, and junior Sammy Geyer touched the wall shortly after with a time of 1:47.80.

Freshman Wilma Johansson earned the Scarlet and Black’s first individual event win of the day, finishing with a career-best time of 1:52.60 in the 200 free. Ferrin secured the first senior class win of the day in the 100 back with a time of 57.90.

Fellow senior Klara Thormalm collected a gold medal in the 100 breast with a mark of 1:05.30 while freshman Alex Roberts led the pack for the 200 fly with a collegiate-best time of 2:11.80. With the dual win secured for the Aztecs after the eighth event of the day, many of SDSU’s swimmers completed exhibition performances throughout the rest of the meet.

Geyer recorded the top mark in the 200 breast with a time of 2:22.70, just .34 seconds off her career-best effort. Johansson earned another top-finish with the best performance in the 100 fly, swimming to a mark of 57.20.

On the springboard, junior Ximena Lechuga Gonzalez topped the field of competition by more than 20 points, placing first with a score of 288.60. The Aztecs earned the top-four finishes in the event, with junior Lexi Lets and Gina Cazares alongside senior Erica Sarver finished in second, third, and fourth, respectively.

The 1000 free and 3-meter diving events were eliminated from the day's competition due to rainy weather and lightning delays.

The Aztecs have a quick turnaround before their next dip in the pool, traveling to the University of San Diego Saturday, Jan. 30 for their final dual meet of the regular season. Action in the pool begins at noon.