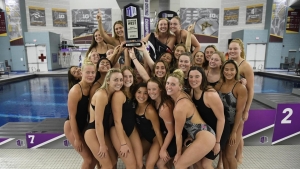 February 22, 2020 (Minneapolis) - For the second consecutive year, the San Diego State swimming and diving team brought the Mountain West Swimming and Diving Championship back to The Mesa. The Aztecs collected 1463.50 points, the most in conference championship history, to successfully defend their conference crown.

“It was really a wonderful team earned championship,” noted associate head coach Steve Allnutt. “The swimmers and divers really came together; we had the largest diving squad there and every one of the divers scored points and made a huge impact, especially Ximena (Lechuga Gonzalez) who made the A final on all three (events) and took home the 3-meter title. On the swimming side, we did a really great job from the first event to the last. In swimming, the way to show how good you are is in your relay efforts, and we were able to win all five of them for just the second time in school history (third in the conference's history). The team’s attitude and effort were amazing from the first race to the last. Our seniors lead our team with class and I’m proud to send them out with their second championship in four years. We are so grateful to our volunteer assistant coach, Rachel Owen, our Athletic Trainer, Natalie Ater, and the rest of the San Diego State staff that helped us accomplish this momentous victory.”

Saturday’s events included the 200 Back, 100 Free, 200 Breast, 200 Fly, Platform Dive, 1650 Free, and the 400 Free Relay. Senior McKenna Meyer opened the final day of competition with a sixth-place finish in the 200 back prelims and moved onto the A finals with a time of 1:58.36. She would go on to finish seventh in the championship heats Saturday night with a time of 1:58.22. Junior Elli Ferrin and freshman Evonne Stehr made a splash in the consolation finals after finishing 12th and ninth in the preliminary heats, respectively. Ferrin went on to finish first (ninth overall) in the consolation heat, swimming to a time of 1:57.60, with Stehr finishing right behind her (10th overall) at 1:58.24.

The Aztecs had representatives in the championship (‘A’ Final), consolation (‘B’ Final) and bonus (‘C’ Final) heats of the 100 free, with senior Alma Thormalm and freshman Mia Ryan securing spots in the ‘A’ final with first and seventh-place finishes in preliminaries, respectively, while sophomores Sammy Geyer and Lizzie Menzmer made the ‘B’ final with the ninth and tenth-fastest time in qualifiers and senior Peyton Wilson swam in the ‘C’ final with a 19th-place preliminary finish. The bonus final saw Wilson top the podium, finishing first (17th overall) with a time of 50.67. The consolation final was led by Geyer, who topped her preliminary heat time by .3 seconds to finish first (ninth overall) with a time of 50.38. The individual championship would go to Thormalm, who touched the wall at 48.55 in the championship final, the fourth-fastest effort in conference history and put an Aztec on the top of the podium for the sprint event for the first time since 2015.

Klara Thormalm made a mark in the record books for her 200 breast efforts Saturday, as she and sophomore Kristina Murphy made the championship finals with NCAA 'B' cuts efforts of 2:11.01 and 2:13.14, respectively. Klara’s championship heat swim of 2:08.30 not only led the junior to top the podium but set a new conference record in the event and topped the previous SDSU program record by over two seconds. Murphy finished sixth in the championship final with a time of 2:12.15. Senior Morganne McKennan qualified for the ‘B’ finals with the 13th-best time in prelims and would go on to secure the top finish (ninth overall) in the secondary finals heat with a time of 2:15.35.

With SDSU’s grasp on the conference championship all but certain, all Aztec swimmers exhibitioned their swims in the 200 butterfly event.

Sophomore Ximena Lechuga Gonzalez continued her dominance on the springboard as she qualified for her third championship finals (of the three possible) of the conference title chase with a score of 261.35 in the preliminary platform diving competition. Her finals score of 292.30 earned her a bronze medal as well as the best score on the platform dive in program history by more than 30 points. The sophomore now holds the school records on the 1-meter, 3-meter, and platform dives.

Karpisz would act as the lone Aztec to swim in the 1650 free event, adding nine points to the SDSU total finishing 17th with a time of 17:18.51.

The Aztecs closed out their incredible championship performance with Alma Thormalm, Klara Thormalm, Mia Ryan and McKenna Meyer recording the top 400 medley time of 3:17.24, the fourth-best swim in conference history and the second-fastest performance in the SDSU record books.

SDSU now readies for postseason action, with all seven Aztec divers prepping for the NCAA Zone E Diving Championships March 9-11 in Seattle.  Courtney Vincent and Morganne McKennan alongside Klara Thormalm all earned direct individual invites to the NCAA Championships while the Aztecs’ 200 medley relay of Vincent, Ferrin, Alma Thormalm and Klara Thormalm has also qualified for the national championship competition. More SDSU swimmers have marks that could qualify them for the national event and will be announced as they are notified of their invitations. The Aztecs who have solidified their tickets to the national championship now prep for the event scheduled to begin March 18 in Atlanta.