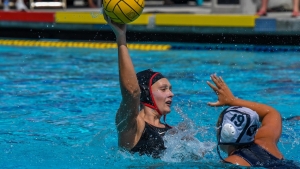 April 27, 2019 (Fresno) - The No. 17 Aztec water polo team fell to No. 12 Loyola Marymount 10-5 in the semifinals of the GCC Championships Saturday afternoon at the Fresno State Aquatic Center. The Aztecs held a 2-1 lead early in the second quarter and then saw the Lions score seven unanswered goals, including six in the third quarter. SDSU will play for third place in the GCC Sunday at 12:45 p.m.

The Lions got on the board first, but then SDSU scored the next two goals. The first came from Haley Hagerty on a Mary Myers assist, followed by Shelby Kraft’s first goal.

The Lions would score two more times in the second quarter to take a 3-2 lead into the halftime break. But then they scored six third quarter goals, including the first five, to put the game out of reach.

Sydney Hurst stopped the Lions’ scoring run after finishing an Emily Bennett assist with 2:34 left in the third, but the damage had been done.

The teams alternated the final four goals of the game.

LMU was led by Mollie Williams and Hana Villanova who combined to score seven goals.

SDSU was just 1-for-10 on power play opportunities.

This was just the third time this season that neither Emily Bennett or Hannah Carrillo scored a goal.

The six goals SDSU gave up to LMU in the third quarter tied the most they have allowed in a quarter this season.