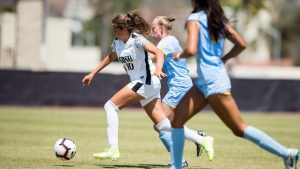 September 7, 2019 (Coral Gables, Fla.) - The San Diego State women’s soccer team and Miami Hurricanes played 110 minutes on Saturday night, but a victor could not be determined as the game ended in the 1-1 tie.

The Aztecs, who controlled the majority of the play in the first half, took the lead in the 44th minute.

Coming off back-to-back corners, Ariana Robles was fouled in the box which led to a penalty kick.  Kiera Utush took the PK and shot low to the left of and under the diving Miami keeper.  The ball found the back of the net for a 1-0 SDSU lead at the 43:22 mark.

It was Utush’s team-leading second goal, both of which have come on penalty kicks, and ended a scoreless streak of 225 minutes. It also sent SDSU to intermission with its first halftime lead of the season.

Despite controlling the run of play for most of the first half, SDSU (1-3-1) was outshot 7-to-5.  However, five of the Hurricanes’ shots were in an eight-minute run late in the first half.  Just when it looked like Miami was building toward something, they had two shots hit the crossbar in the run, the Aztecs who stole the momentum with the late tally.

Miami (2-1-1) came out in the first 15 minutes of the second half looking to take the game to San Diego State.  They had a point-blank shot which sailed past the far post and another clang off the crossbar.  A minute after the Hurricanes failed attempts, SDSU had a chance to double its lead.

Malia Kaleiohi got behind the defense, but a throughball was just a bit beyond her ability to control it and her shot sailed just outside the far post.

Inside the last 20 minutes of regulation, Ariana Robles dispossessed a Miami forward of the ball and sent it into the offensive zone.  Lauren Dicus swerved behind the defense, picked up the ball and was one-on-one with the Miami keeper.  Dicus drove to the top of the six and fired a shot which was just outside the right post.

The Hurricanes found the equalizer on a shot from Bayleigh Chaviers with 6:11 to go.  It came from just outside the left side of the 18, went over the outstretched hand of Lisowski and into the upper corner of the far post.

McKenna Wallace had the final dangerous chance in regulation.  She picked up a loose ball in the box and took a point-blank shot in the 86th minute.  It was to the right of the keeper, who made the correct choice with her dive. Tyler Speaks, the Hurricanes keeper, stopped it to send the game to overtime.

Neither team attempted a shot in the first overtime and Miami took three in the second extra period, but the game ended in a 1-1 draw.

For the game, the Aztecs were out shot 19-to-11, including 8-to-3 in shots on goal.  Utush was credited with a team-high four shots.  Phoebe Leitch took two and Robles, Broacha, Chloe Frisch, Malie Kaleiohi, and Wallace attempted one shot each.

Miami’s offense was paced by Kristina Fisher, who produced four shots.  Speaks came in at the start of the second half and is the keeper of record.

“We scored on the penalty kick, but also had several dangerous chances which we just couldn’t finish,” said head coach Mike Freisen.  “We’re missing a few small things.  I was happy to see the progress, but we have to get better at finishing.

“(On the back line,) Sarah Broacha, Rachel Speros and Ariana Robles are playing at an extremely high-level right now, probably better than they ever have.  We traveled across country, dealt with a lot of humidity and the time change and I feel we made a good step forward tonight.”

The Aztecs return to the SDSU Sports Deck for their next game.  SDSU hosts San Diego on Friday evening with kickoff scheduled for 7 p.m.