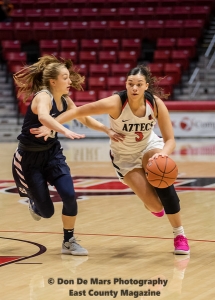 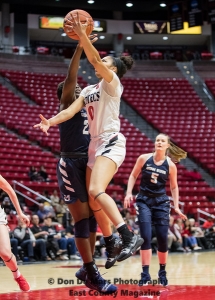 Freshman Sophia Ramos paced the Aztecs with 15 points on 7-for-10 shooting. Téa Adams had 11 points, Najé Murray had 10 and Mallory Adams had nine points and ten rebounds.

The Aztecs had just six points in the first quarter, a new season-low, all coming from Téa Adams. The Aggies, who were coming off a big win over first place Boise State, shot 50 percent in the opening quarter and took a 19-6 lead. Due to Aztec turnovers and USU offensive rebounds, the Aggies attempted 11 more shots than the Aztecs in the opening quarter.

SDSU stepped up the defensive pressure in the second quarter and held the Aggies to 25 percent shooting. The Aztecs trailed by 16 points early in the second but used runs of 15-2 and 11-0 to pull within three points. However, Utah State finished the half on a 5-0 run and took a 29-21 into the locker room at the half.

The Aztecs outscored the Aggies 13-6 to start the second half to bring the score to 35-34. However, they never held a lead the entire game. They were down 50-46 with 6:49 left in the game, but the Aztecs turnovers started to take their toll and the Aggies put the game out of reach with a 15-3 run. 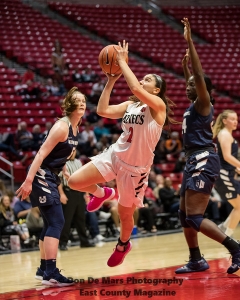 Utah State had 21 assists to 12 turnovers while SDSU had just 13 assists and 19 turnovers.

The Aztecs attempted just seven shots in the first quarter. Utah State had 18 and made nine of them. 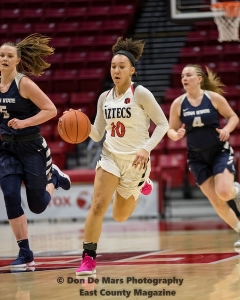 The Aztecs will play at San José State Saturday at 2:00 p.m. 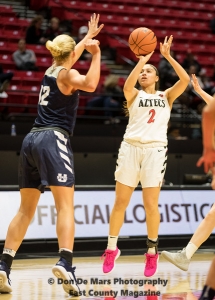 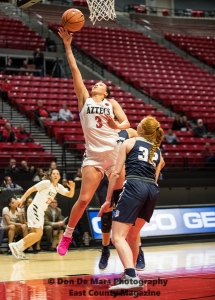