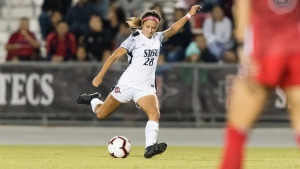 October 19, 2019 (Colorado Springs) - The San Diego State women’s soccer team trailed by two goals 29 minutes into its game at Air Force, but led by freshman striker Rachelle Elve, who scored twice and assisted on another goal, the team stormed back to earn a 5-4 decision at Cadet Soccer Stadium on Friday night.

The teams played an even first 20 minutes, but then tallied four goals in the next nine.

Darcy Weiser drove down the right side and into the box.  An Air Force defender tried to run her off the ball and did so but she stopped short of the end line.  When the ball didn’t go out of bounds, Weiser was able to get a boot on it and centered it to the top of the six.  Taylor Moorehead was crashing the box and pounded a shot that the Falcons keeper didn’t even see as it screamed past her to make it 1-1.  It was Moorehead’s third goal and Weiser’s second assist of the season.

However, the Aztecs dug deep and found a goal in the 36th minute to cut the lead to 3-2.  Elve tallied her first strike of the game, and third of the season, at the 35:41 mark.  Chloe Frisch picked up her fourth assist of the year on the play and the teams went to the intermission with the Aztecs down 3-2.

It took seven minutes into the second half for SDSU to find the equalizer.  At the 52:30 mark, Laura Fuentes scored her third goal in as many games to make it 3-3.  Elve was credited with an assist, her third of the campaign.

The Aztecs took their first lead of the game on an unassisted goal from Frisch in the 68th minute. It was her fourth of the season and gave SDSU a lead it would never relinquish.

The final goal for San Diego State, and what would end up being the game winner, was produced by Elve.  At the 78:53 mark she combined with Frisch again to make the score 5-3.

The Falcons scored in the 86th minute to cut the lead to 5-4, but from there SDSU slammed the door to earn the victory.

For the match, the Aztecs outshot Air Force 18-to-17, including 12-to-7 in shots on goal.  San Diego State’s 12 shot on goal are a season high and its 18 total shots are two shy of its season best.

The five goals for SDSU are the most the team has scored since it defeated Air Force 5-0 last season on the Sports Deck.

Frisch led the offense with five shots, three on frame, a goal and two assists.  Elve had two shots, both were on goal and found the back of the net, and she added an assist.  Moorehead and Fuentes produced three shots each, both put two of those on goal and each scored once.  Lauren Dicus and Veronica Avalos took a shot apiece.  Despite allowing four in, Brooke Lisowski made three saves and earned her sixth victory of the season.

Air Force was led by four shots each from Jillian Jamero and Emma Nelson and each scored a goal.  Danielle Katz made seven saves but gave up five goals in the loss.

“We’re very excited to get this win on the road,” head women’s soccer coach Mike Friesen said. “Air Force put us under a ton of pressure, especially early, and they scored a great first goal.  After they went up 3-1, I thought it was a huge mental performance by our team to come back and get it to 3-2 by the half.  In the second half we continued to close the gap and kept fighting.  Overall, our performance was good. Obviously, you don’t want to give away all the goals we did, but at the same time we are scoring goals right now and that is keeping us in games like this. I’m excited we played well and got the result and I feel like this puts us in a great position going forward.  Now we have to turn around and face another tough opponent on the road on Sunday.”

The Aztecs are right back in action on Sunday, October 20 at Colorado College.  Kickoff is scheduled for 12:00 p.m.