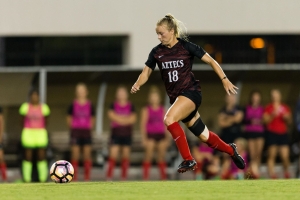 October 21, 2019 (Colorado Springs, Colo.) - As they did on Friday night at Air Force, the San Diego State women’s soccer team surrendered the first goal on Sunday against Colorado College and then came back for a 3-2 victory and a two-game sweep of its games in Colorado Springs this weekend.

San Diego State (7-7-1, 6-2-0 MW) completed its longest stretch of games away from home this season, four contests, with a 3-1 record and are now in sole possession of second place in the conference table with three games remaining in the regular season.

Down 1-0 after a goal in the seventh minute, freshman Rachelle Elve tied the game at the 14:00 mark with her fifth goal of the season and third of the weekend.

Barely two minutes later, at the 16:02 mark, Elve assisted on a goal from Chloe Frisch which put the Aztecs in front for good.  Elve drove down the left side of the field and at the end line played the ball in to the box where Frisch finished for a 2-1 SDSU lead.  The goal was Frisch’s fifth of the season and tied her with Elve for the team lead.  The assist was Elve’s fourth on the year and second of the weekend.

The teams went to intermission with San Diego State up 2-1 and just 51 seconds into the second half SDSU got what would be the game winner from Laura Fuentes.  Frisch and Taylor Moorehead assisted on the strike to make it 3-1.

Colorado College outshot the Aztecs 20-to-16, including 11-to-5 in shots on goal and both team’s attempted five corners.

Brooke Lisowski was up to the task in goal for SDSU.  She made a season-high nine saves in earning her seventh victory of the season.

Frisch led the offense with seven shots.  She had two on frame, a goal and an assist.  Rachel Speros produced three shots with one on goal.  Jessica Sanders took two shots and Ariana Robles, Sarah Broacha, Elve and Fuentes got off a shot a piece.

The Aztecs return to action next weekend with a pair of games.  On Friday night, Oct. 25, they host Fresno State and then on Sunday it’s Senior Day.  Kickoffs are scheduled for 7 p.m. and 11:30 a.m., respectively.  Make sure to follow @ECMagSports on Twitter to see if we'll have coverage of Sunday's game.