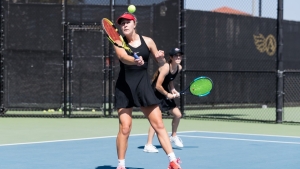 Due to health and safety precautions, the Aztecs played with five student-athletes and were forced to forfeit their No. 3 doubles match and their No. 6 singles match.

In doubles play, the Aztecs, down a point before the ball hit the court, came storming back to secure the doubles point in favor of the Scarlet and Black. Junior Regina Pitts and Cécile Morin topped FSU’s Jane Ellis and Deniza Macinkevia 7-5 on court one while Nnena Nadozie and Abbie Mulbarger earned a 7-5 victory over Carolina Piferi and Carlotta Nonnis Marzano on court two.

SDSU entered singles play up 1-0, but Fresno State stormed back and swept all four singles points (including the default No. 6 matchup). On court one, Dalia Ahmed topped Nadozie 6-3, 6-2, while on court five, Carolina Piferi bested Alexandria von Tersch Pohrer 6-1, 6-3. To secure the match, the Bulldogs’ Hummel took down Abbie Mulbarger on court four, winning 6-3, 6-2.

The Aztecs’ surge to the doubles point victory was especially impressive as they had to default on court three due to a lack of available student-athletes. It is just the third time this season SDSU has won the doubles point.

“I am really proud of the team’s effort today as we were playing a little bit short-handed against a very solid conference team,” noted head coach Peter Mattera. “We came up a bit short but I am looking forward to another conference challenge tomorrow.”

The Aztecs hit the courts again tomorrow for their second taste of MW conference action, welcoming the University of Nevada, Reno to The Mesa for a dual match. Doubles play is set to begin at noon.