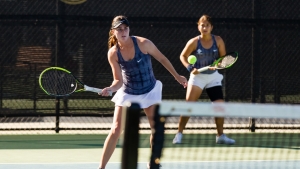 Aztecs are narrowly defeated by the Beach 4-3

February 1, 2019 (San Diego) - San Diego State women's tennis put up a tough fight against Long Beach State on Friday, but could not overcome the Beach in the end and dropped their first dual of the season 4-3. Despite claiming the doubles point early in the afternoon, singles proved to be more challenging for the Aztecs.

The Scarlet and Black began the day fired up entering doubles action where the pair on court No. 1, senior Jenny Moinard and Shakhnoza Khatamova, struggled to find their groove against Long Beach State’s Wiktoria Kutkowska and Dominique Meyer, dropping a 6-2 decision. Sophomores Abbie Mulbarger and Nnena Nadozie kept an upper hand in the No. 3 match to win 6-4 over Emma Bardet and Zara Lennon, while Junior Mia Smith and freshman Alicia Melosch charged through their second-seeded match to claim the doubles point for SDSU, taking down Natalia Munoz and Lalita Devarakonda 7-5.

In singles play, freshman Agustina Rimoldi Godoy was unable to gain speed against Sadaf Sadeghvaziri in the sixth seed and gave the Beach their first point of the day with a 6-3, 6-2 loss in the match. On court two, Smith was unable to repeat her doubles success solo, surrendering a 6-2, 6-2 decision to Emma Bardet, but Nadozie played strong on court three to bring the score back to two-all with a 6-3, 6-3 win over Zara Lennon.

In the fourth seed, Melosch worked through a close first set but was unable to bounce back in the second and fell 7-6 (5), 6-2 to LBSU’s Natalia Munoz, however, Jenny Moinard forged a convincing win in a challenging matchup against Rutkowska and claimed the third point for the Aztecs with a 7-6 (2), 6-3 victory.

Friday’s match came down to its last on the courts with Mulbarger versus Meyer in the five seed. Despite her second-set comeback after dropping the first, Mulbarger had trouble finishing off Meyer in the third set and ultimately fell 6-2, 1-6, 6-4.

Currently at 3-1, the Aztecs prepare for their trip to Cal State Fullerton on Saturday, Feb. 9. First serve at CSUF is set for noon.