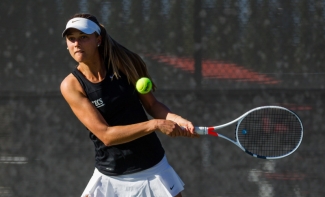 March 30, 2018 (Las Vegas) - San Diego State’s women’s tennis team traveled to Las Vegas, Nev., on Friday, March 30, when it dropped a close match to the Rebels, 4-3. The Aztecs secured the doubles point, but faced challenges in singles action and couldn’t put together three additional points for a victory.

The Aztecs logged their 11th doubles point of the season on Friday morning vs. the Rebels as junior Magda Aubets and freshman Nnena Nadozie topped opponents Izumi Asano and Juliet Zhang 6-0 on the third seed. In the top seeded doubles match, junior Jenny Moinard and sophomore Mia Smith could not overcome Aiwen Zhu and En-Pei Huang, falling 6-1, but seniors Jana Buth and Paola Diaz were successful in claiming the doubles point for the Aztecs with a 6-2 win over Anna Bogoslavets and Samantha Li.

In singles action, the Aztecs faced a tough break on court six as freshman Abbie Mulbarger suffered a minor injury but was unable to finish her match against Zhang, who claimed the point for UNLV (6-4, retired). In the third seed, Diaz struggled against UNLV’s Huang, dropping a 6-1, 6-3 decision, and the Rebels tallied a third point in the dual when Asano topped Aubets, 6-1, 6-2, in the second seed.

On court No. 5, Jovana Kenic claimed a 6-1, 6-1 win over Nadozie, securing the dual victory for the Rebels. Though the Aztecs’ fate was sealed for the dual, Buth notched a consecutive singles win over a ranked opponent with today’s 6-2, 6-1 victory over No. 53 Aiwen Zhu in the top seed. Junior Moinard was also able to finish the day with a singles victory, logging a 6-2, 6-2 finish over Bogoslavets on court four.

With today’s match, the Aztecs record their 11th doubles point of the season.

The Aztecs, 8-9 on the season, visit Long Beach State on Saturday, April 7, at 1 p.m., before returning home to the Aztec Tennis Center on Sunday, April 8 to face San Francisco at 2 p.m.