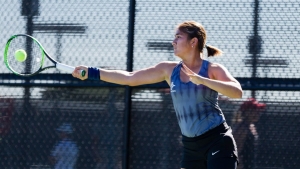 SDSU falls to 4-3 in Friday's dual match vs. the Blue Raiders

March 8, 2019 (San Diego) - San Diego State women's tennis kicked off a seven-match homestand on Friday afternoon when it hosted, and ultimately fell 4-3 to, Middle Tennessee State. The Aztecs had the edge in doubles play, but faced tough matchups in singles action and eventually dropped the dual to the Blue Raiders.

The Scarlet and Black found their stride in doubles play as freshman Shakhnoza Khatamova and senior Jenny Moinard teamed up on court two to take down MT’s Kim Kermet and Luisa Zirilli, 6-4, while senior Magda Aubets and sophomore Abbie Mulbarger allowed the Aztecs to capture the doubles point with their 6-4 defeat over Lidia Burrows and Marta Peris Herrero.

In singles play, the Aztecs gave way in a couple early matches before putting points of their own on the board. In the four seed, Zani Barnard topped freshman Alicia Melosch, 6-3, 6-0, while MT’s Luisa Zirilli captured a 6-2, 6-3 decision against Aubets in the fifth seed. Sophomore Abbie Mulbarger’s 6-4, 6-2 win over Lee Bernard in the sixth seed to tie it up, two-all.

In the No. 3 match, sophomore Nnena Nadozie put together her fourth straight singles win with a 6-1, 6-4 performance against Kim Kermet, which was ultimately the final point of the day for the Aztecs. SDSU’s Moinard eventually dropped her three-set match, 6-2, 4-6, 6-3, to Constance Magazzini, and Khatamova fell late, 6-4, 5-7, 6-3, to Lidia Burrows.

The Aztecs, now 6-6 on the season, continue their March homestand on Sunday when they host Pacific for a noon match at the Aztec Tennis Center.