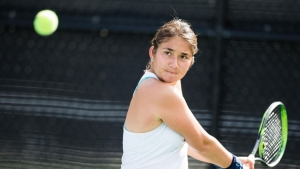 SDSU comes up short in lengthy match vs. Toreros

February 23, 2019 (San Diego) - San Diego State women's tennis was unable to put a win together at USD on Saturday, falling to the Toreros 5-2. The Aztecs dropped their doubles point in a tiebreak and fought hard in singles, but could only tally two points in the match.

The Aztecs traveled down I-8 to face the Toreros at the Skip and Cindy Hogan Tennis Center Saturday, beginning the dual match with a tough loss in doubles. The Aztecs split the first two matches with USD, where senior Magda Aubets and freshman Agustina Rimoldi Godoy fell 4-6 to Kati Kukaras and Gemma Garcia in match three, while sophomore Nnena Nadozie and freshman Alicia Melosch topped Maria-Paula Torres and Solymar Colling 7-5 in the top seed. In the remaining match between senior Jenny Moinard and Mia Smith, and Daniela Morales and Maria Tyrina, the Scarlet and Black fell in a narrow tie break 7-6 (6), to drop the doubles decision.

In singles action, the Aztecs battled to bounce back after a close defeat in doubles, but dropped the No. 4 matchup where Melosch fell 6-1, 6-0 to Garcia. Freshman Shakhnoza Khatamova carved out a strong 6-1, 6-2 victory over Morales on court two to put the Aztecs on the board, but soon after, Rimoldi Godoy dropped her third set for a 4-6, 6-1, 6-1 loss in the fourth seed against Sophia Chow.

The Toreros picked up their fourth point in the fifth seed when Torres topped sophomore Abbie Mulbarger 6-0, 7-5 and added another in a highly-contested match between Moinard and 80th-ranked Colling, with Colling claiming a 6-3, 7-6 (5) decision in the top seed. Despite challenging losses on other courts, Nadozie powered through two sets to top Kukaras 7-6 (3), 6-3 in the third seed and capture a second Aztec point in the dual.

SDSU’s Nnena Nadozie goes 4-0 in competition for the week with her wins in doubles and singles on Saturday at USD.