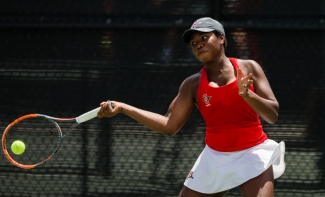 April 28, 2018 (Boise) - The San Diego State women’s tennis team traveled to Boise, Idaho, this weekend to compete at the 2018 Mountain West Women’s Tennis Championship, where the fourth-seeded Aztecs dropped a 4-1 decision to fifth-seeded Wyoming in Friday’s quarterfinals at the Appleton Tennis Center.

The Cowgirls came out ahead in doubles action, claiming wins in matches one and two to take the point. SDSU junior Magda Aubets and freshman Nnena Nadozie solidified a strong 6-1 win over Ana Tkachenko and Myiah Scott on court No. 3, but the Aztecs were not so fortunate on courts one and two.

In the second-seeded match, the Cowgirls regained control with Magdalena Stencel and Milka Genkova’s 7-6 (0) win over seniors Jana Buth and Paola Diaz on court two. Junior Jenny Moinard and sophomore Mia Smith also took Wyoming’s Elisa Koonik and Tessa van Der Ploeng to a seven-point tie break, where they ultimately fell 7-6 (4) to give the Cowgirls the doubles point.

Nadozie stayed hot entering singles action where she once again dominated Scott in the sixth seed to log a 6-1, 6-0 victory for the Aztecs. Despite tying the score at one-all, Wyoming took charge on courts one and three where Stencel edged Buth in straight sets 6-4, 6-3 and Koonik downed Moinard 6-1, 6-2.

With the upper hand at 3-1, Wyoming locked in its quarterfinal win with a clinch in the fifth-seeded match between Tkachenko and SDSU freshman Abbie Mulbarger, who was unable to get a lead over Tkachenko and ultimately fell 6-2, 6-3. With the win on court five, the Cowgirls secured a slot in the MW semifinals, leaving matches between Diaz and Genkova and Aubets and van Der Ploeg unfinished.

With Friday’s loss, the Aztec women’s tennis team finishes the season with a 10-13 overall record.