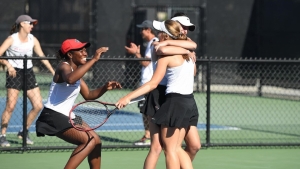 SDSU advances to championship match for first time since 2013

April 26, 2019 (San Diego) - For the first time in six seasons, the third-seeded San Diego State women’s tennis team will play in the Mountain West Championship match following a 4-2 upset over second-seeded Air Force in Friday’s semifinal. The Falcons clinched the doubles point, but the Aztecs charged back in singles action to advance.

“What a hard-fought, close, great college tennis match,” head coach Peter Mattera said. “We knew it was going to be just a dog fight, and it was. That Air Force team has so much confidence and so much energy that they bring, even to our home courts, and we knew it was going to be that way. I give my team a lot of credit. So proud of them that they were able to just go out there and do their thing.”

In doubles play, the Falcons got a quick start on the Aztecs with Elizabeth Barnickel and Nadeen Lieberman topped Magda Aubets and Abbie Mulbarger 6-1 in the three seed, and with two tight matches on courts one and two, Air Force’s Ashleigh Harvey and Meredith Jones captured a 6-4 decision over senior Jenny Moinard and junior Mia Smith in the second seed to clinch the first point.

In singles action, sophomore Nnena Nadozie threw down for a second straight day with a speedy 6-2, 6-1 finish over Kristin Kerrigan from the four seed. Freshman Shakhnoza Khatamova struggled against Air Force’s TJ Fumagalli in the top match with a leg injury, and ultimately dropped the decision 6-4, 6-0.

Smith and Moinard each bounced back from the doubles loss as the junior put together an sharp 6-2, 6-3 win over Barnickel in the second seed, while Moinard clinched a 6-2, 6-4 match in the three seed against Jones to move the Aztecs into the lead at 3-2.

With two neck-and-neck matches on courts five and six, it was freshman Alicia Melosch who clinched the victory for the Scarlet and Black, bouncing back from a first-set loss to finish 4-6, 6-2, 6-3 over Harvey in the fifth seed.

“They didn’t let the fact that they didn’t get the doubles point slow them down and they brought really good energy to each of those singles points,” Mattera said. “It was just a battle out there, and I thought today they rose above all the other factors and played great tennis. They played a great team match. What fun that was. Anybody that missed that should come tomorrow and watch the Aztecs in the final against UNLV. No excuses. It’s a Saturday. It’s not first thing in the morning, it’s 11 o’clock. Come on out!”

Sophomore Nnena Nadozie continues to improve upon her personal bests, completing her seventh straight singles victory, a new team high, to move up to a team-best 16 wins in dual match play. She leads the Aztecs with the highest singles win percentage at .800 (16-4).

The Aztecs advance to the championship match of the Mountain West tournament for the first time since 2013, when then No. 1-seed and 39th-ranked SDSU was upset in the final by No. 63 UNLV, the second seed, 4-1.

San Diego State (15-9, 3-1 MW) advances to the Mountain West Championship to face No. 1 seed UNLV Saturday at 11 a.m. The two teams meet once again at the Aztec Tennis Center as SDSU looks to avenge a regular-season loss (4-3) to the Rebels. Saturday’s championship match will be streamed live on the Mountain West Network and live results will be available.