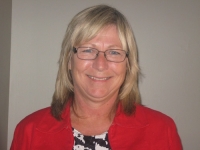 She wants to focus “on the kids more so than adults, focus on student achievement, education, the students’ and districts’ needs.”Stevens was motivated to run because her daughter went through the district, graduating from Helix Charter in 2008 and recently graduating from California State University San Marcos.

She believes she is qualified for the Grossmont Union High School District (GUHSD) because of her experience as a software writer for World Research Inc. and as the Director of Public Affairs for the Council for a Competitive Economy during Reagan’s White House years. She has continued to write and edit in a variety of corporate environments.

“Most of the people on the board have all been there a long time,” she notes. Stevens cites problems such as the board’s failure to go forward with constructing the Alpine High School and other issues with bond projects. “I think they have to take responsibility for it, and they have to know the wording of the bonds. I want to look to do the right thing for the parents and students.”

After attending the school board meetings, she observes, “I don’t like how they interact. I don’t understand their bickerings, from an outsider’s point of view.”

She voiced disappointment over the board majority’s controversial choice to expend bond funds on unauthorized projects that voters had approved to build a high school in Alpine. “I’m afraid the money is gone. I think they spent a lot of the money on [new] projects, like swimming pools and performing art centers.”

Stevens, whose daughter attended Helix Charter High School, hasn’t personally been impacted by the redrawing of district lines.  But she observes, “I know all charter schools are full, and people have to get out of the other schools towards charters. It tells me there’s something about the charters that’s pulling them in. I think that schools that aren’t charter aren’t getting the attention they need,” she says, adding, “I think charters can handle the problems more effectively.”

She is opposed to both education funding initiatives, Propositions 30 and 38. “I don’t think [increasing taxes] are effective.”

She doesn’t have any endorsements. “I decided I wasn’t going to worry about them. I like being kind of behind the scenes. I have no desire to make public speeches.”

She adds that, “I think there’s a need for people not connected to the community. I think we need to have more ‘outside’ people come in and say ‘no, we won’t do it that way, run it by people first.’“

Her budget priorities are getting through some of the construction projects, like Alpine High, which is also a major issue in the district.

Regarding class sizes, “I think most class sizes are large.” She notes that enrollment at charter schools is up, and “they have to turn people away…However, a whole line of classes have been dropped.” On that note, she mentions that she was at a recent board meeting, and some home economics students pitched an idea to get a sewing class back in. The board decided to reconsider, but the community hasn’t heard back from the board yet. “We need to respond to the students’ and community’s needs. Communication is another problem in the district. They spend too much time fussing and not getting back to students.”

She also wants readers to know that her daughter attended Lemon Avenue Elementary and La Mesa Middle, which are feeder schools for the GUHSD.

“I want to help make East County a little better for everybody” by offering the best in educational opportunities to all students in the district, she concludes.