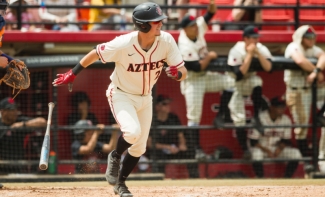 April 24, 2018 (Riverside) - The San Diego State baseball team logged its largest single-game margin of victory since 2007, defeating UC Riverside, 19-1 at the Riverside Sportsplex on Tuesday night. SDSU improves to 27-14 on the year, while UCR drops to 15-20.

On the mound, Justin Goossen-Brown earned the win after a four-inning start, allowing just one first-inning run. The SDSU bullpen impressed as well, as Casey O'Sullivan, Ray Lambert, Jacob Flores and Noah Fluman all recorded one-inning performances without allowing a hit. David Hensley recorded a scoreless ninth inning, allowing one hit with one walk and one strikeout.

SDSU set the offensive standard in the first inning, scoring a pair of runs on a Verdon sacrifice fly and a Dean Nevarez RBI single.

UCR struck for its only run of the game in the bottom half of the first. After going down scoreless in the second and third, SDSU extended its lead to 4-1 after Julian Escobedo scored on a wild pitch and Chad Bible scored on a Casey Schmitt sacrifice fly.

The Aztecs logged back-to-back five-run innings in the fifth and sixth, breaking the score open to 14-1. In the fifth, Verdon and Nevarez hit back-to-back home runs. Verdon then went on to homer in the second consecutive inning, hitting a solo shot after Hensley posted an RBI triple earlier in the sixth inning.

The ninth inning was highlighted by a Sean Ross RBI single and Hensley hitting a 2-RBI double and later scoring on an error. Denz'l Chapman capped SDSU's 19-run outburst after scoring on an Escobedo groundout.

The Aztecs await a highly-anticipated Mountain West home series against third-place UNLV, beginning Friday at 6:00 p.m. SDSU currently stands a half-game ahead of UNLV for second place in the MW.