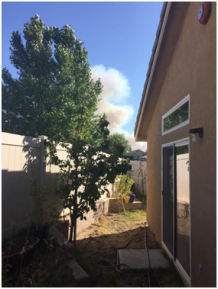 Update 7 p.m.:  Cal Fire Captain Isaac Sanchez says the fire is now 60 acres. According to Capt. Sanchez it is entirely in Mexico, though several eyewitnesses have told  ECM it did cross the border earlier in at least one spot near Campo. Cal Fire describes the fire as south of Bell Valley near Potrero,burning southeast along the Mexican side of the border fence."

Firefighters will remain at scene throughout the evening in order to ensure that it does not spread to the north.  Currently, CAL FIRE and San Diego County Fire have 12 engines, 4 water tenders and 4 hand crews (approximately 100 personnel) at scene.

August 13, 2016 (Campo) – A fast-burning brush fire that started in Mexico has now crossed into the U.S. in Campo, multiple residents confirm.  The fire crossed the border fence about two miles west of the Campo store.

“It is on both sides of the fence and they are pulling water from private ponds not Lake Morena,” says Karen Noblitt-McIntyre. Lake Morena has been drained to below 3% capacity by the City of San Diego.

Long-time residents of the area advise that the brush there has not burned in many years. Some are voluntarily evacuating near the border.