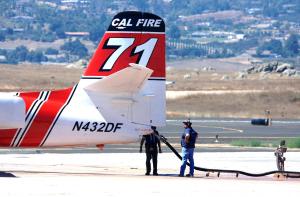 May 1, 2013 (Ramona) – Responding to long lines at airports across the nation, Congress passed legislation on April 26 to restore funding for air traffic controllers at many major airports. But wording that would have saved the air traffic control tower at Ramona Airport was removed, ECM has learned.

“While I welcome the news that Congress moved to prevent harmful cuts in the FAA budget, I’m extremely disappointed that wording aimed at saving the Ramona Airport tower and other towers was stripped from the legislation,” said Supervisor Dianne Jacob.

She added, “We need to step up the pressure on Washington and make sure the money is also directed to Ramona and similar facilities that are on the front lines of keeping our citizens safe. With summer coming on, and the peak of fire season looming in our region, keeping the Ramona tower in operation is as critical as ever.”

The Federal Aviation Administration (FAA) has stated that it aims to close the tower in June due to sequestration cuts mandataed by Congress.

The Ramona Airport’s air traffic control tower provide importan safety protection for Cal Fire crews during wildfires.T he tower was installed after a 1995 mid-air collision killed three people.  The tower coordinates over 155,000 operations a year, Jacob has said, adding that shutting down the tower would be a "potential for disaster."