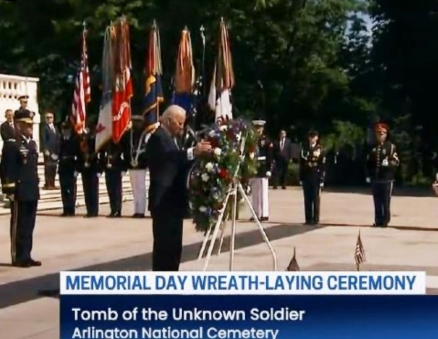 The President recalled the death of his son, Beau, a Delaware Army National Guardsman who served in Iraq and died of cancer. “To all of you who are fighting with the fresh pain of loss,” he told military families, “the day will come when the image of your loved one will bring a smile to your lips before it brings a tear to your eyes.”

He recalled the origins of Memorial Day in the wake of the Civil War, a war for “liberty and for the preservation of the Constitution” then noted that there are hundreds of graves at Arlington from soldiers who lost their lives in more recent  conflicts, from two world wars to the wars in Afghanistan and Iraq.

Biden said “democracy must be defended at all costs” calling democracy “the soul of America and I believe it’s a soul worth fighting for…a soul worth dying for.”

Then he alluded to recent threats to our democracy, stating, “The soul of America is animated by the perennial battle between our worst instincts—which we’ve seen of late – and our better angels. Between ‘me first’ and ‘we the people.’ Between greed and generosity, cruelty and kindness, captivity and freedom….Democracy means the rule of the people.”

He emphasized, ”What we do now, how we honor the memory of the fallen, will determine whether or not democracy will long endure…The struggle for democracy is taking place around the world---democracy and autocracy. The struggle for decency and dignity…The struggle for posterity, prosperity and progress. And yes, the struggle for the soul of America itself…Democracy thrives when the infrastructure of democracy is strong: when people have the right to vote freely and fairly and conveniently; when a free and independent press pursues the truth, founded on facts, not propaganda; when the rule of law applies equally and fairly to every citizens, regardless of where they come from or what they look like.”

He called on Americans to honor the sacrifice of soldiers who gave their life for our freedoms by “sustaining the best of America, while honestly confronting all that we must do to make our nation fuller, freer, and more just.”

The President continued, “This Memorial Day, remember that not all of us are called to make the ultimate sacrifice. We are called, by God and by history and by conscience, to make our nation free and fair, just and strong, noble and whole. To this battle, may we now dedicate our souls, that our work may prove worthy of the blood of our fallen. For this work-- "the work of democracy—is the work of our time and for all time.”

He concluded, ”May the light perpetually shine upon the fallen.  May God bring comfort to their families.  And may God protect our troops, today and always.  God bless you all.”