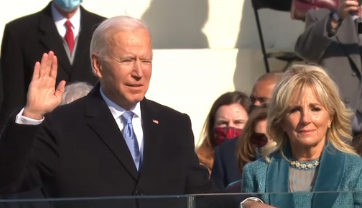 January 21, 2021 (Washington D.C.) – Under the heaviest security since the Civil War, one week after a violent attack on our nation’s Capitol, President Joe Biden and Vice President Kamala Harris were sworn into office on January 20.

It was a day of historic firsts. Harris is the first woman, first African-American and first Asian-American to become Vice President. Her husband, who is Jewish,became First Gentleman. The nation’s youngest Poet Laureate, 22-year-old Amanda Gorman, delivered a powerful rendition of her poem, “The Hill We Climb”, a message of unity, healing and courage written after she witnessed the insurrection at the Capitol.

Chief Justice John Roberts swore in President Biden. In his inaugural speech, Biden said the day represents “A day of history and hope” adding, “Democracy has prevailed.   So now on this hallowed ground where just days ago violence sought to shake this Capitol’s very foundation, we come together as one nation, under God, indivisible, to carry out the peaceful transfer of power as we have for more than two centuries.”