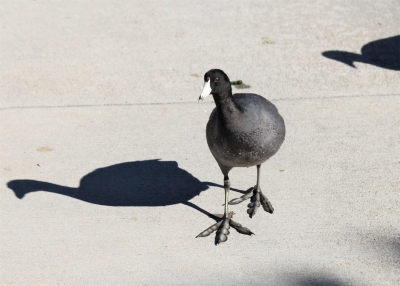 By Greg Dunne
March 14, 2021 (East County Lakes) - The crazy old Coots are out. No, no, no, I’m talking about the American Coot (Fulica americana), also known as the Mud Hen. And yes, that’s where the origin of the affectionate term “old coot” came from. By the 1700s, the term “old coot” was often used for “a harmless, simple person.” 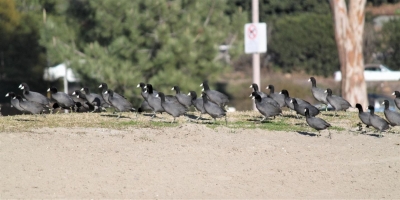 What looks like a duck, swims like duck, acts like a duck, isn’t always a duck. The Coot is definitely not in the duck family. American Coots are more closely related to the Sandhill Crane than Mallards or other ducks. Coots are in the Rail family, but unlike most Rails who are secretive and often hiding in the tall reeds, the Coot is never shy and always in the center of attention. American Coots like being where the action is and hanging out with the ducks and other waterfowl.

The Coots can be a rowdy and raucous group, often fighting and squabbling with other birds and among themselves. Mostly I believe they are badgering others for food rights and space at the lake. Although at most lakes you are not supposed to feed the animals, when I see people feeding the ducks and other waterfowl the Coots are usually the first ones on the scene. The Coots are mainly aquatic plant eaters, sometimes eating insects and small vertebrates, and do quite well on their own. So, we don’t need to help the Coots with lunch or dinner. 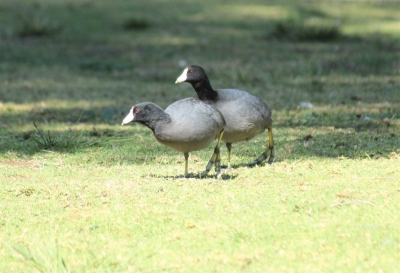 The American Coots are not the most graceful of birds. They are awkward and a bit clumsy at times and need plenty of running room to get airborne. Despite their awkwardness, they are accomplished swimmers and divers. Their feet are not webbed but have broad lobes of skin on their toes that help them in the water when swimming. If you’ve ever visited a lake in San Diego County, then you have surely seen the American Coot. And probably not just one or two, but many, many Coots! I’ve seen as many as 100 to 150 in groups and in small groups of three or four. The records show some groups of Coots in the thousands, but I haven’t seen that large of a flock at any of our lakes. 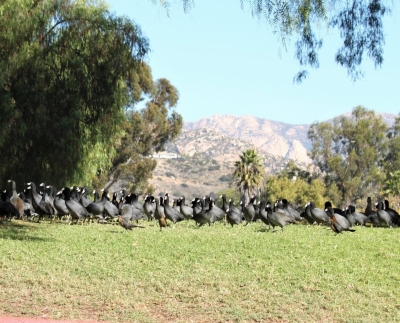