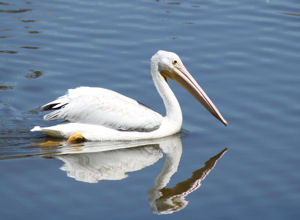 By Greg Dunne
March 27, 2012 (San Diego’s East County)--  You might ask what a Pelican is doing inland at any of these East County Lakes: Lake Murray, Lake Jennings, Santee Lakes and Lindo Lake.  Most people associate Pelicans with the sea coast, as do I.  When I see Pelicans at La Jolla Cove it seems perfectly natural and there are always plenty of them to be seen.  Of the two species of Pelicans in our area, The Brown Pelican and the American White Pelican, it’s the American White Pelican that is frequently seen at and around our lakes in the East County.

There is good reason for this.  It winters along the coast but only breeds inland throughout the county’s lakes!  Another distinct difference between the Brown Pelican of the coast and the American White Pelican is their fishing skills and techniques.  The American White Pelican does not dive for fish as the Brown Pelican does.  Instead, it dips its head underwater to scoop up fish.  Several pelicans may fish cooperatively, moving into a circle to gather fish into a group and then dipping their heads under simultaneously to catch fish. 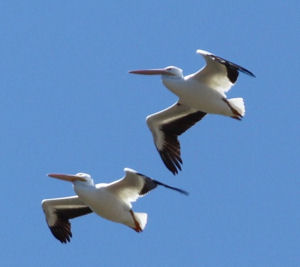 Pelicans often appear awkward in the water, but are amongthe great gliding and soaring birds.  They are very graceful in the air with their great wing spans.  If you see one of these gliding and soaring overhead (one of my favorite birds to watch glide) its wing span can be as much as 10 feet!  It has a wingspan of about 95–120 inches, making it the second largest wingspan of any North American bird after the California Condor.
It is a very large and plump bird with its overall length being about 50–67 inches, courtesy of the huge beak which measures 13–14.4 inches in males and 10.4–13 inches in females.  Although typically these birds average between 11 and 20 pounds their body weight can be as much as 30 pounds.
Unlike most birds which warm their eggs with the skin of their breasts, pelicans incubate their eggs with their feet. They hold the eggs under the webs that stretch from the front toes to the hind toe, essentially standing on the eggs to warm them. This peculiar incubation method made them vulnerable to the effects of the pesticide DDT. The DDT made the eggshells thin, and the incubating parents frequently cracked their eggs.