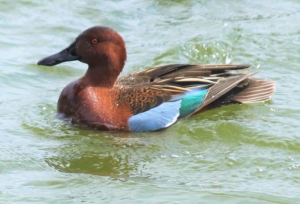 March 14, 2021 (Santee) - The ducks are out at Santee Lakes. Santee Lakes is a great place to do some bird watching, get a walk in, or of course do some fishing. And, if you are birding, maybe get a chance to see a Cinnamon Teal.

Of all the lakes out in the East County, I think the one with the largest population of ducks is Santee Lakes--from the Mallards, Northern Shoveler and Wood Ducks, to the American Wigeon. Plus you are guaranteed to always find the American Coots hanging out with the ducks. Santee Lakes is one of my favorite places to bird watch because of the wide diversity of species ranging from Osprey and Peregrine Falcons to Snowy Egrets and Great Blue Herons, Belted Kingfishers as well as Western Kingbirds. An estimate of over 200 species can be seen in a calendar year at Santee Lakes. 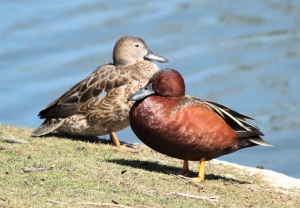 The last few times I walked Santee Lakes, I observed the Cinnamon Teal at a distance and could not get a good look or close enough to photograph them. They tend to be small in numbers in groups around our local lakes and are often difficult to spot. They do stand out, though. because of their bright cinnamon reddish plumage on the males with duller brown plumage on the females. When observed up close you can see the distinct red eye of breeding males – the females and immature or non-breeding males have rich brown eyes. They are usually in the water and unlike other ducks are seldom seen on the banks sunning, so take some binoculars with you to help to get a good look at them in the middle of the lake. 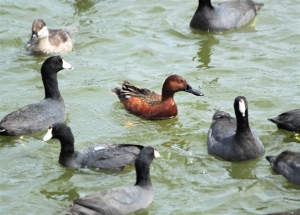 Like most ducks the Cinnamon Teal feeds mostly on aquatic vegetation, marsh grasses, horned pondweed, millet, and seeds. A smaller portion of their diet is made up by snails, beetles, dragonflies, and many types of flies.

As a hiker here in San Diego for 40 plus years I’ve obviously seen a big increase in walkers and hikers during Covid 19. That’s a good thing and a bad thing. It’s good that people are out enjoying nature and getting some exercise. It’s only a bad thing when we don’t keep the trails clean and respect the nature we are walking with. So, pack it in and pack it out. Keep the trails clean. Enjoy a Santee walk around the lake. It’s a very doable walk, approximately 3.5 miles around the lake. And the ducks and birds will be there for your viewing at no charge!