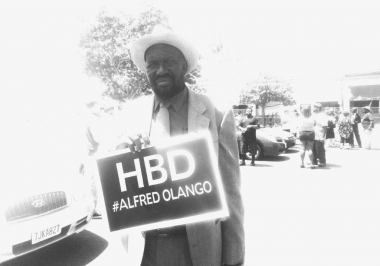 August 3, 2017 (El Cajon) -- At a march to celebrate what would have been Alfred Olango’s 39th year of life, his father, Richard Olango Abuka, recalled one of his favorite memories; his son’s 13th birthday, “celebrating coming here” one month after they arrived in America.

Alfred Olango was born July 1978 in Uganda and came here as a refugee with his family in 1991. He died on September 27, 2016, killed by bullets fired by an El Cajon policeman.  The death of a black man by a white police officer triggered racial tensions and civil un 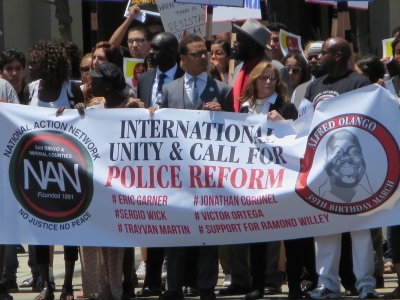 rest in El Cajon at a time when the nation was reeling from a series of high-profile, controversial police shootings.

During Saturday’s march, signs saying “HBD (Happy Birthday) Alfred Olango” dotted the crowd of an estimated 100, among other signs, during the march that started near the old Hometown Buffett building in El Cajon and ended at Prescott Promenade.

At the head of the march, banners and signs commemorated other African-Americans killed by police, from local cases to nationally prominent names.  (Photo, right, by Robert Gehr)

Abuka, who was an accountant in Uganda, was in maximum security detainment as a political prisoner when another of Olango’s birthdays happened.  “We left Uganda to escape police brutality,” said Abuka.

Among others in attendance was Raymond Wiley, a San Diego resident, who was arrested July 21st while on a walk near his home in San Diego.  “I was walking over in Encanto with my key to my Cavalier and stick for the dogs,” said Wiley.  He was charged with carrying a weighted cane among other things after an officer claimed he thought he was casing parked cars.  After the National Action Network held press conferences denouncing the case as racial profiling, the charges were dropped.

Wiley was at the march to addr 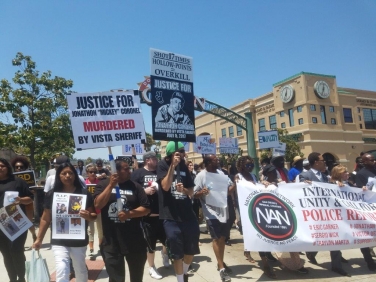 ess policing issues in the community. So was Kenzy Feinstein, of El Cajon, who was in the midst of the civil unrest that rocked the city after Olango’s death. “I was out here since day one for Alfred.”

Others, besides Abuka, had birthday wishes for Olango.  Donna Daum of Santee wanted justice as a birthday gift for the departed Olango.  Olango’s death was deemed ‘legally justified” by the now retired County of San Diego District Attorney Bonnie Dumanis.

Olango’s sister had called 911 asking help for her brother, who was suffering a mental health crisis in a parking lot outside a restaurant with drive-through window.  Police arrived; one officer immediately advanced on Olango, gun drawn as he ordered him to put up his hands; the officer’s partner pointed a taser at Olango. Olango pulled a vaping/smoking device from his pocket and pointed it at officers in what police said resembled a shooter’s stance. The officer, who claimed he thought it was a gun, fired multiple shots, killing Olango.

“When I was 14 I couldn’t get a job because I was a monkey,” said Justin (last name withheld), a bystander who recalled the racial slur.  But he declined to participate in the march.  His reasoning? Justin said “I want to be recognized as an American. I don’t believe in black lives matter.” He reported he grew up in the south.

Virginia Franco of San Diego stated, “I’m here as an individual and to represent Democratic Socialists of America. I’m here 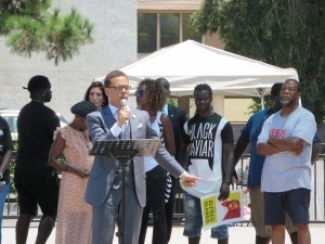 because black lives matter.”  Franco supports the protection of minorities who cannot protect themselves, a view springing out of childhood experiences of her own and champions political choices that promote that protection.

Before the march commenced, speakers such as Dr. Shane Harris with the civil rights group National Action Network San Diego, spoke to the crowd. “Under the banner of Alfred Olango, we are here to represent all cultures who have dealt with policing issues and injustices,” Rev. Harris said. 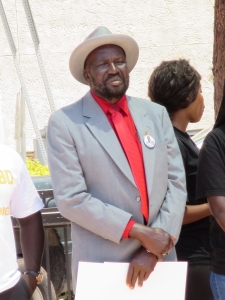 The march ended at Prescott Promenade, where Olango’s family members were acknowledged, introduced by his brother, Apollo Olango, and others.  Banners for the Alfred Olango Foundation were displayed on the side.

The Alfred Olango Foundation for police reform filed Articles of Incorporation in the State of California on April 21, 2017.