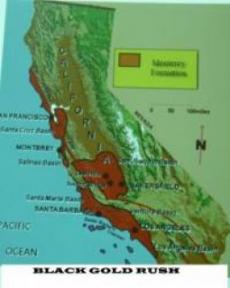 April 21, 2013 (San Diego) – “Another scourge is beginning in California,” environmental activist Peg Mitchell told audience members at a forum on environmental justice issues hosted by Activist San Diego on April 15.  That “scourge”  is fracking – and in California, it’s all about extracting oil, not natural gas.

To frack for oil requires millions of gallons of water –a precious commodity in Cailfornia.  It also means injecting toxic chemicals that corporations are not required to disclose due to the “Halliburton Law” pushed through by former Vice President Dick Cheney.

The public doesn’t have a right to know where fracking is occurring or where its waste products will be dumped—even though fracking can cause earthquakes, disturb radioactive substances in the earth, reinject contaminated water into wells, and potentially pollute thousands of miles of coastline.

So why the push to frack for oil in California?

The rewards are potentially huge.  For example, the Monterey Shale formation off  California’s coast covers 1,750 square miles and may hold 15.4 billion gallons of oil. That’s half the amount found in Saudi Arabia and 64% of all the oil in the 48 states in the continental U.S.

The San Diego Union-Tribune has editorialized in favor of fracking, or what it calls  a “brown energy revolution.”

But California’s shale oil is a dirty form of oil, folded accordion-like b the San Andreas fault into shale deposits in or near very populated areas including Los Angeles, Santa Barbara, Monterey and San Francisco.  The potential consequences are of concern for residents all over California – 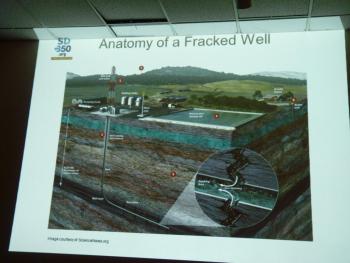 particularly the parched southern areas such as San Diego, where water is in short supply.

Even if all the shale oil could be extracted, it would provide only a ten-year bubble and would be exported – since it is too dirty to be burned in California due to strict air pollution control laws.  But Mitchell warned,  “Water gets polluted.”

To extract shale oil, an oil company leases the land and builds multiple wellheads to drill through sand and aquifers to the shale below – then with new technology, the drilling turns horizontally through the shale.  Explosives are used and fluid is injected to break  apart the shale.  This disturbs minerals and radioactive substances,  explained Mitchell, an anti-fracking activist also involved in SanDiego350.org and Citizens Climate Chapter in North County.   Fracking fluid or methane can leak back into wells.

“Tanker trucks…will take millions of gallons of fresh water,” she said.  “So far, 2.3 million gallons have been used for oil [through fracking in California]. They’re taking water rights. If this keeps on, everything will be energy-company owned.”

Shockingly, the oil companies are not required to disclose what is in the fracking fluid being pumped into California’s water and the earth. Carcinogenic elements are exempt from disclosure due to former Vice President Dick Cheney, who obtained an exemption for fracking from the Clean Water Act and other environmental laws.

The California Department of Conservation/Division of Oil, Gas and Geothermal Resources (DOGGR) does not even require a permit to frack, only to drill a well. Companies are not required to disclose what chemicals they use, or where they dispose of them.  Potentially, these toxins and carcinogens could even be trucked to distant communities and dumped, polluting additional communities. 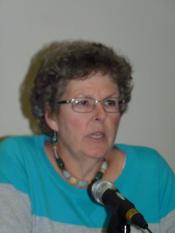 California lags behind other states in regulation of fracking. But that may soon change.

Several bills have been introduced in the California Legislature to address fracking problems. AB 1301 would put a moratorium banning fracking, for now.  The measure will be heard April 29 in the Assembly Natural Resoruces Committee.  Two other bills, AB 92 and SB 4, would require groundwater monitoring and regulation of fracking.

Some proposals would require notice to homeowners if fracking is planned, as well as information on where companies will get water for fracking.

“Governor Brown is in favor of fracking if it is regulated,” Mitchell revealed.  Concerned citizens should write to the Governor and to their State Assembly and State Senate reprsentatives, she added.

Some local communities, such as Los Angeles County, are also taking it upon themselves to pass laws regulating fracking.

Fracking itself is not new.  But only recently has technology enabled oil companies to drill horizontally and on a large scale.   The cost is high and amounts to “raping Mother Earth,” said Mitchell, who views fracking California shale for oil as a losing battle since a 10-year-supply is “not an energy Nirvana.”

The "black gold" rush for oil at all costs to fuel America's energy appetite also includes the controversial Keystone Pipeline, which environmentalists claim will be an environmental nightmare on several fronts.  The pipeline would run from Alberta, Canada, home of the tar sands, to the U.S. Gulf Coast.

Supporters contend the pipeline is needed to meet energy demands and create jobs.

But opponents say any benefits are outweighed by problems. Most important, the Keystone Pipeline would have a catastrophic negative impact on climate change, numerous climate experts contend.

“Another 565 gigatons of C02 is all that we can release to stay below a two percent Centigrade temperature increase,” said Mitchell.

Climate experts have warned that releasing more C02 than those levels would amount to game over, the tipping point at which the earth cannot recover and irreversible catastrophic climate change would occur.

The Keystone Pipeline is predicted to unleash the equivalent of 240 billion tons of coal, enough C02 from that single project to put the world beyond that threshold, experts warn.

The tar sands are mined by clear-cutting boreal forests which are important carbon sinks, meaning the forests sequester or store green house gases.  Cutting them down and using open pit mining releases massive amounts of carbon into the atmosphere, fueling global warming.

An energy-intensive process separates the tar from sands and sends the sludgy mixture flowing through the pipeline, diluted with acids.  The highly toxic mixture would then be pumped through America’s heartland. A recent pipeline break in Arkanasas demonstrated the pontential hazard to residents as toxic oily goo flowed through streets and across people’s yards. 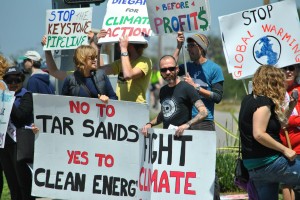 The Keystone Pipeline threatened to pollute navigable waters on tribal lands in Canada, leading to  massive protests by First Nations indigenous people there  who have succeeded thus far in persuading the Canadian government to keep the pipeline off their lands.

In the U.S.,  350.org has launched a petition seeking to keep the pipeline off  American lands by stopping it from being built. The group wants  to get 1 million public comments opposing the Keystone Pipeline before the Interior Department’s April 22 deadline. To date, over 950,000 comments against the pipeline  have been received (You can post a comment here:  http://act.350.org/letter/a_million_strong_against_keystone/)

With easier to access oil sources becoming exhausted, turning to dirtier sources of oil  such as shale oil and tar sands means extraction at a high environmental cost for short-term gain. Mitchell contends this is short-sighted, putting corporate profits above the public health and the heatlh of our environment, even our planet itself.  She, like a growing number of others, supports cleaner energy alternatives, conservation, and mass transit to reduce polllution and lower greenhouse gas emissions --not make these problems worse.