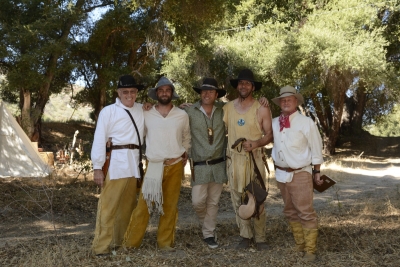 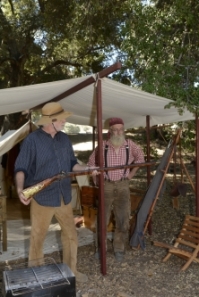 “This is a  rare rifle that Rick gunsmith Richard Emms] made for me, a Bedford rifle,” says Mike Hite, whose ancestor fought in the Revolutionary War in Valley Forge and Yorktown. “He was too poor to afford a rifle like this, which probably would have cost seven or eight dollars.”  He then shows us a different rifle purchased by the Revolutionary Army for a dollar apiece similar to what his ancestor would have carried into battles.  View video:  https://youtu.be/HX1_zh07RTc

Next up, the San Diego Chuckers, a knife and tomahawk throwing club, demonstrated their skills in a friendly competition. The secret is all in pacing your distance from the target, I learned. View video: https://youtu.be/vGTa1hsiDcQ

Visitors could take lessons and try their hand at hitting at tomahawk throwing. Yesterday, even an 86-year-old woman hit the target after some brief instruction.  View video: https://youtu.be/Yv2Ww_0TyvM 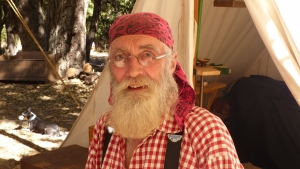 Of course, we headed out to the firing range, where Emms demonstrated his marksman skill with a Pennyslvania rifle he says is accurate for up to 200 yards.  View vi

If you’re going to the Rendezvous,  you can also shop for period wares and goods ranging from powder horns to 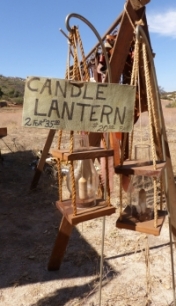 camp candles, leather belts, coyote fur masks and more, such as the items pictured, sold by “RJ” from Lemon Grove.

The Laguna Mountain Rendezvous is located at the Mataguay Scout Ranch at 27955 CA-79, Santa Ysabel just before Warner Springs. 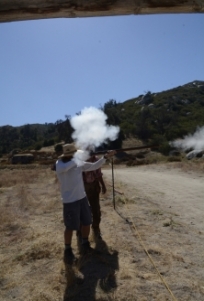 Access is along a three-mile dirt road that ends in a wooded grove where you’ll feel as if you’ve been transported back in time.

Participants dress in period attire and camp out in teepees and canvas tents, with accessories accurate down to the last detail – from cast iron cooking pots to a replica of a 19th century flag flying proudly in the encampment.  Lon Atkinson tells the story of the flag, sewn by his wife. View video: https://youtu.be/VFIriy-szTo

For more information you can visit www.LagunaMountainRendezvous.com or the group’s Facebook page at https://www.facebook.com/Laguna-Mountain-Rendezvous-154665167884580/. 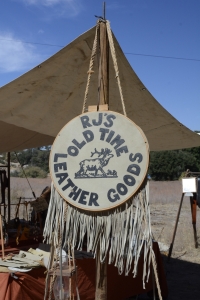 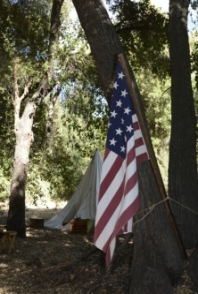