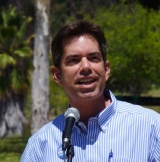 October 2, 2010 (San Diego) – Stephen Whitburn, candidate for San Diego County Board of Supervisors – 4th District, is pleased to announce that the Board of Supervisors has adopted one of his key reform proposals. After Whitburn appeared before the supervisors on September 28, the Board approved his proposal to ban supervisors from taking gifts from organizations that receive taxpayer funding through the Neighborhood Reinvestment Grants.

“I applaud the supervisors for joining me to end the practice of accepting gifts from the organizations they fund,” said Whitburn, who had denounced a “slush fund” of discretionary spending for supervisors. “Unfortunately, it takes a tough election year where two of their own are in electoral jeopardy to make this simple, yet important, change happen. Ron Roberts has been absent from our community for too long, and even on this day when the Board adopted my proposal, he was absent for yet another vote… I am excited about what we’ve accomplished today, and I look forward to achieving much more when I’m actually elected.”

East County Magazine has requested an interview with Supervisor Roberts regarding his candidacy, but we have not received a response. We previously profiled Whitburn’s candidacy during the primary race: http://www.eastcountymagazine.org/node/3129.