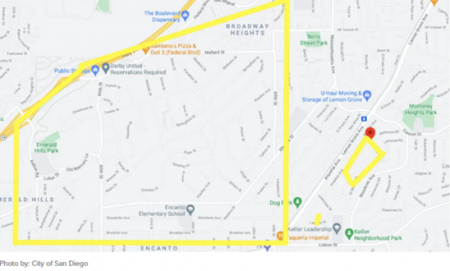 UPDATE: As of Saturday, June 12 at 11:05 a.m., the precautionary boil water notice has been lifted, reports Ready San Diego.

June 11, 2021 (San Diego) -- The City of San Diego is advising the public to not drink tap water without boiling it first in the Encanto area. This includes the area north of Brooklyn Avenue, south of State Route 94, west of 69th Street and east of Kelton Road, as well as Leppert Court, the 1100-1469 blocks of Watwood Road and the 1000-1400 blocks of Larwood Road

The Boil Water Notice was issued after a construction crew damaged a water main near Imperial Avenue and 65th Street Thursday.The city expects to have the problem resolved by Sunday. Until then, those affected should comply with the notice to avoid potential illness.

Free water will be available at the locations below. The water can be used for drinking, cooking or other needs. Customers are requested to bring their own containers to obtain water. However, individual water bottles will be available.

The Peoples Association of Justice Advocates, along with the National Black Contractors Association and the San Diego Hip Hop 5K, partnered and launched an urgent twenty-four hour campaign to support Encanto residents affected by the "Water Boil Advisory" this weekend to get 1,000 bottles of water in 24 hours to provide clean drinking water to the over 2,500 residents of the Encanto neighborhood affected by the advisory.
They call on San Diegans across the region to respond to the crisis of Encanto residents by stepping up to drop off water bottles at the Association's headquarters in Encanto.
https://www.google.com/maps/search/6125+Imperial+Ave.+San+Diego,+CA+92114

Nearly 2500 residents of the Encanto neighborhood in San Diego are affected by a "Water Boil Advisory" issued through Sunday when the city of San Diego says the issues with the water may be resolved. A water boil advisory affects not only the potential of people drinking the water but also the potential of them brushing their teeth or doing other things with the water before boiling it because it is contaminated. As a result of this water boil advisory it means residents may be out of using their faucet water for the weekend.

Shane Harris, the President of the People's Association of Justice Advocates will step up along with the San Diego Hip Hop 5k and the National Black Contractors Association to launch a collaborative effort to distribute 1000 water bottles in one day to residents in need. The urgent one day campaign being led by Harris's office seeks to at least support 40% of the nearly 2500 residents affected by the water boil advisory. The initiative titled "1000 in one day" launched at 1:30 PM today when Harris announced it, and made the first contribution toward the effort and called on other San Diegans across the region to drop off water immediately over the course of the next 24 hours at 6125 Imperial Avenue in San Diego, CA 92114.