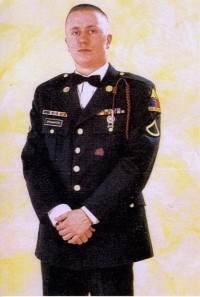 His mother told NBC7News that the family has now lost everything.  A sign honoring the memory of Brud Cronkrite, who was awarded the Bronze Star and Purple Heart, still stands at the I-8 overpass at Buckman Springs Road in Pine Valley. He was memorialized by the State Legislature  is buried at Fort Rosecrans.

Family and fellow soldiers posted memories of Brud at a Fallen Heroes Memorial site.  Brud’s brother, Billy,wrote, “He was a real true American hero who loved his country and his job as a soldier.I will do my best to live my life to the fullest and carry on your memory. He is my hero and I feel him with me always.”

Major W. Thomas Burns called Cronkrite a “true patriot,” adding, “He took care of his soldiers and continued to do so till the time he fell. He was a good friend to those fortunate enough to know him.”

One Cronkrite family member witnessed the home burn to the ground,  adding to the anguish, NBC 7 reported.

No list has yet been published with names of the other families who lost homes. However a search is underway for Jim Keefe and his girlfriend, Kylie, who have not been seen since the Border Fire charred their property.  County Animal Services has rescued some dogs left at the property, but could not save them all. The couple’s van and trailer were also left behind, leading neighbors to fear for their safety and organize search efforts today, as ECM reported. The Sheriff Search and Rescue Team has also been deployed.

The wars have been phony but the people we have lost were anything but. A poem:..... If you are able, save them a place inside of you and save one backward glance when you are leaving for the places they can no longer go. Be not ashamed to say you loved them, though you may or may not have always. Take what they have left and what they have taught you with their dying and keep it with your own. And in that time when men decide and feel safe to call the war insane, take one moment to embrace those gentle heroes you left behind. Captain Michael Davis O'Donnell 1 January 1970 Dak To, Vietnam Less than 3 months after writing those words, Mike O'Donnell died.