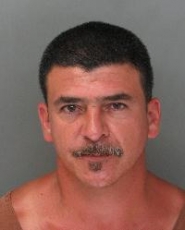 January 11, 2011 (San Diego) – U.S. Border Patrol Agent Marcos Gerardo Manzano Jr., 26 has been arrested yesterday on a federal warrant and charged with harboring illegal aliens and making a false statement, San Diego FBI Special Agent Keith Slotter announced today. Also arrested was Jose Alfredo Garrido-Morena, 26, who is charged with being a deported alien with no legal right to enter or be present in the U.S.

The arrests are the result of an investigation by the Border Corruption Task Force.  Authorities are also seeking Manzano's father, Marcos Gerardo Manzano Sr., who is a fugitive.

Garrido-Morena, was arrested yesterday by members of an FBI SWAT Team early this morning in the 3600 block of Shooting Star Drive in San Diego after the SWAT Team made entry into the residence occupied by himself and others. Garrido-Morena is not employed by any U.S. government agency. No injuries were reported as a result of the SWAT entry.

According to a complaint filed in this matter, in the U.S. District Court, Southern District, of California, the Border Patrol agent’s father, Manzano Sr., is also charged with violations of federal immigration laws and making a false statement The father remains a fugitive and the Border Corruption Task Force seeks his whereabouts. Manzano Sr. is described as a Hispanic man, 46, 5’8” tall, 190 pounds, with black hair and hazel eyes. If you have information on Manzano Sr., contact the FBI at telephone number, (858) 565-1255.