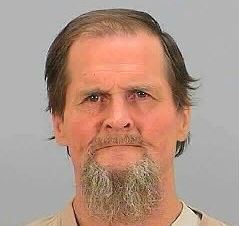 January 14, 2015 (Pine Valley)-- Earlier today, U.S. Border Patrol agents arrested a fugitive and convicted sex offender with an outstanding warrant after he confessed to being wanted by authorities during a routine stop of a bus in Pine Valley.

The westbound commercial bus approached the Pine Valley Border Patrol checkpoint around midnight on I-8 and was referred to secondary inspection. An agent boarded the bus and questioned the passengers about their citizenship. As the agent approached a 55-year-old man, he verified that he was a U.S. citizen, then blurted out to the agent, “I bet I won’t leave this bus with all these warrants I got.”

Based on the man’s statement, agents requested that he leave the bus for further questioning.  A records check revealed that the passenger, Scott Gothier, had a criminal history for burglary and assault with attempt to rape and had an outstanding felony warrant out of Sacramento. A registered sex offender who also has a history of drug offenses, Gothier was the subject of a manhunt last year after he violated terms of his release and became a fugitive.

Gothier was detained by agents and will be turned over to the San Diego County Sheriff’s Office pending extradition.