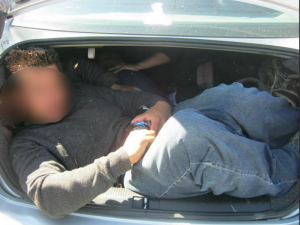 Two men in a silver 2008 Volkswagen Jetta approached the checkpoint around 4 p.m. A U.S. Border Patrol canine team alerted agents, who found two women and a man in the trunk. According to the Border Patrol, all three of the immigrants were sweating profusely from the high temperature and lack of ventilation.

The driver and his passenger were arrested and face federal charges for human smuggling. Their vehicle was seized by the Border Patrol.