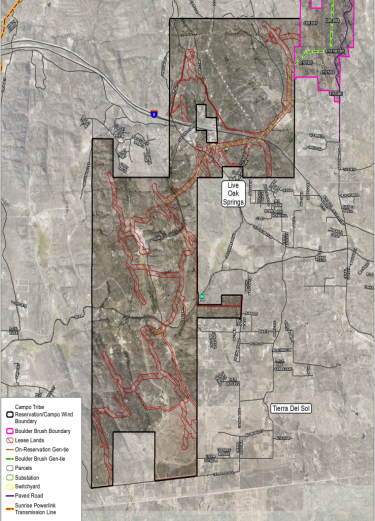 February 16, 2019 (Boulevard) – The County will be holding a scoping meeting February 28 at 6 p.m. at the Boulevard Fire Station regarding Terra Gen’s Boulder Brush Gen-tie power line and new substation facilities proposed on private land to support the Campo Wind project.

The wind turbines would cover most of the Campo reservation with 60 4-megawatt wind turbines, if approved. The new turbines are twice as powerful and about 100 to 200 feet taller than the existing 25 Kumeyaay Wind and 57 Tule Wind turbines in the area, according to Donna Tisdale, chair of the Boulevard Community Planning Group.  The public is encouraged to come voice your views as part of the official public input process at this meeting.

Public comments are due to the County by March 18.