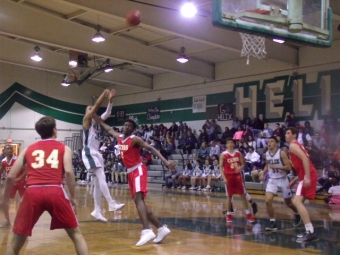 February 20, 2018 (La Mesa) - Helix High boys basketball is in the playoffs again.  Tonight, they hosted round one of the CIFSDS Division 1 playoffs against Cathedral Catholic.  The Dons just barely squeezed into the playoffs with a 12-13 record overall and a 7-5 record in league. 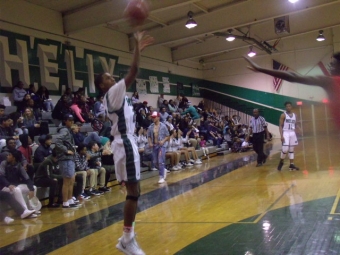 For the first time in any playoff run, the Highlanders had a worthy opponent; the Dons stayed close behind on threes by freshman Alex Wade and a monster jam by fellow freshman Obinna Anyanwu, but threes from sophomore Maurice Holmes kept the Highlanders afloat and they held a slim 18-16 lead after one.

In the second quarter, Thomas Notarainni introduced himself.  The Cathedral Catholic freshman drove hard and fast to the hoop, but Helix kept it up and drained from downtown:  threes from seniors Carson Baker and Amari Green and from freshman Kai Jennings widened the gap and the Highlanders led 34-26 at the half.

Despite a strong start to the third quarter, a three from the Dons tied the game.  But thanks to a strong and-one by senior Javon Davis, Helix reclaimed the lead.  But mistakes and fouls were costly as Helix once again escaped the third by the hair on their necks, up 45-43. 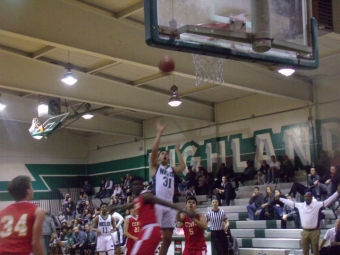 The fourth quarter was full of blunders and mistakes from both teams. Helix played keep-away for most of the quarter.  But with a minute left, Notarainni tied the game up on an and-one. Helix senior Jalen Hinson got the lead back for the Scotties on a layup.  Anyanwu tied it up again on two free throws.  After Baker missed a layup, Notarainni shot an air ball three and we went to overtime tied at 50.

In overtime, the Highlanders went cold and the Dons got shots to fall.  Notarainni drained his three and Anyanwu made a layup and a monster jam.  The Scotties hit a last-minute three, but it was too late.  The Dons pulled away and dashed the Highlanders’ playoff hopes with a 63-59 win.  The Highlanders end the season on a very high note, however, going 19-10 overall amd 8-2 in the Grossmont League.