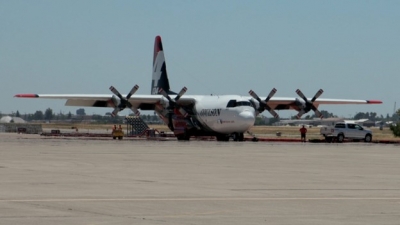 Victims were firefighters from Wyoming, Arizona and Florida

Photo courtesy of Gov. Gavin Newsom's office:  C-130 that crashed in Australia today is same one shown in photo at McClellan Air Base during an event last August attended by Newsom.

The C-130 Hercules aircraft built by Lockheed Martin and repurposed to fight fires was operated by Coulson Aviation of Canada, which has grounded its fleet to re-assess safety conditions and honor the victims.

“Our heartfelt condolences go out to the family, friends and colleagues of the crew from Tanker 134 that wre lost during a tragic crash while battling the devastating Australia fires.  Cal Fire stands with you during this difficult time,” Cal Fire Chief Thom Porter said.

Governor Gavin Newsom voiced condolences to families of the crew and Cal Fire for the loss of “three heroic American firefighters”  He adds, “This tragic accident reminds us all of the too-high cost of the scourge of wildfires, as well as the sacrifice of first responders from around the world. California and Australia, already united by the deadly threat of wildfires, now grieve this tragic loss together.”