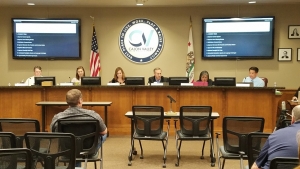 By Miriam Raftery
December 1, 2019 (El Cajon) – Cajon Valley Union School District has provided information on training and qualifications of its drivers, in response to a California Public Records Act request submitted by ECM after an October 4, 2019 injury accident at which the district’s driver was found at fault.
According to the California Highway Patrol, a district employee made an “unsafe turning movement” and lost control of the district pickup truck he was driving, which was towing a trailer.  The vehicle veered into the path of a sedan on Avocado Blvd. near Mt. Helix, causing a head-on collision that caused serious injury to both drivers, also causing minor injuries to an infant. The vehicles also careened into the front yard of a home. Alcohol was not a factor, according to CHP officer Jeff Christy.
Due to personnel privacy protection, the district did not release the name of the driver, his driving record, nor how many years he had been driving vehicles for the district.
However, the district’s executive coordinator, Naomie Rodrigues, did provide responses detailing training the driver received and requirements for district drivers.
Asked what training is required to tow vehicles and if this driver had received such training, she replied, “The DMV does not require a special license or training to tow this type of trailer. However, new employees are assigned to work with a senior more experienced coworker that provides training/guidance on navigation on school sites and in traffic.  Yes, the driver in question received the mentioned training and has been working for a few years in this capacity.”

As for what requirements the district has for employees to drive district vehicles and whether a clean driving record is required, Rodrigues stated that applicants for jobs requiring driving as a primary function typically submit an H-6 from the DMV and have their DMV record reviewed as part of the screening process. She adds, “We use a standard guideline (point system) for driving offenses and would not employ someone with more than the acceptable number of moving violations within a three-year period. Employees who drive as a primary job duty are also enrolled in the Pull Notice program where we are notified of any infractions.”
Asked how eligibility is determined and whether district employees are given priority for driving jobs, Rodrigues responded, “Under the Merit System Rules and Regulations, hiring authorities are entitled to three ranks from the eligibility list from which to make their hiring selection. Eligibility lists are posted either Promotional, Open or Dual.  The Personnel Commission staff evaluates the District's internal candidate pool in order to determine if we have a sufficient number of internal candidates to establish a valid list, and based on that, determine how best to post the recruitment to assure the best qualified candidates.  If there is a sufficient qualified internal candidate pool, we post the recruitment as Promotional Only.  More often, however, positions are posted as Promotional/Open.  This provides for a Promotional list from which internal candidates are potentially selected first; then, when there are fewer than three ranks on that list, candidates from the Open list are certified for selection.”
She further elaborated, “All candidates are screened based on their qualifications as required of the position.  Only those candidates who meet the minimum qualifications would be invited to participate in the examination process.  Successful candidates are ranked on an eligibility list and the top three candidates are 'certified' to the hiring authority for selection.  Applicants applying for positions that require driving as a primary function of the job typically submit an H-6 from the DMV and their record is reviewed as part of our screening process (i.e., School Bus Drivers, Van Driver, Delivery Driver, Groundskeeper II, etc., and any substitute working in the aforementioned classifications)."

Really, it was the least he could do after throwing her there.