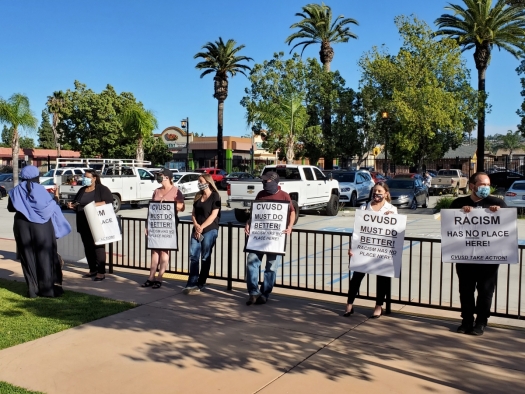 Board to decide future use of distance learning technology at 1 p.m. today; Superintendent apologizes over staff comments

One report was about a CVUSD school district employee and the revelation of a document of a secret meeting held over the weekend involving Dr. David Miyashiro and four district Trustees (except not Jill Barto) at the shuttered Marriott Coronado Resort and Spa.

The district also had two protests by parents yesterday outside district headquarters, one over racism concerns raised by staff comments, the other objecting to a district plan to continue distance learning instead of in-person classes this fall -- a vote delayed until an emergency session convening this afternoon after parents raised vigorous objections.

10News reported CVUSD Superintendent David Miyashiro apologizing for district employee’s notes taken during a weekend planning summit at the Marriott Coronado Resort and Spa last Saturday. The “planning summit” involved the district’s teachers union, school board members, and district management. CVUSD Board of Trustee member, Jill Barto, was reportedly not informed of the meeting and was excluded by the district in what she believes is retaliation for her federal lawsuit against the district alleging civil rights and First Amendment violations.

One section of notes in the shared file includes comments describing parents as “stay at home mom, do not want to teach their kids,” and also references to some parents as being “right-wing” adding that “not all believe this is real and believe it will be finished by August.” The comments refer to the COVID-19 pandemic. 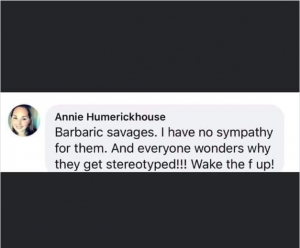 The district took another direct shot on Tuesday when The San Diego Union-Tribune reported that a white CVUSD employee wrote on her Facebook page calling people associated with the George Floyd protests, “Barbaric savages. I have no sympathy for them. And everyone wonders why they get stereotyped!!! Wake the f up.”

The district reportedly would not confirm the identity of the employee, and the employee did not respond to requests for comment. A protest over the racial remarks drew about 10 protestors yesterday. Superintendent Miyashiro posted on Facebook last week stating that the district is investigating the comment and will take “appropriate correction action if warranted.”

He wrote, “We are aware that Cajon Valley Union School District employees recently posted offensive messages on social media regarding some of the activities taking place across our nation following the tragic death of George Floyd. I want our community to know that these postings, which appear to have been made outside of school hours, do not reflect the views or values of our school district. Our district is strongly committed to values of tolerance, compassion and respect. We are investigating the matter and will be taking appropriate corrective action if warranted. We will also be communicating with all staff to remind them about these values and their status as role models to children in our community.”

Also yesterday, some 100 parents rallied outside of the gates of the school district administration building in downtown El Cajon Tuesday night objecting to Miyashiro’s plans for the district to keep schools closed in the fall and utilize an education model developed by the Murrieta School District that would continue to heavily rely on internet-based distance learning. 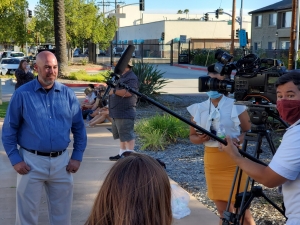 CVUSD parent Jason Kaminsky (photo, left) told San Diego NBC 7 during the rally, “The fear is that it is going to be a permanent change to the education system. Not here. That’s not what we want,” he said. Several weeks ago, Kaminsky posted a video on Youtube alerting local parents what the district is proposing.

East County Magazine over the course of several months during the pandemic lockdown has learned from many parents of their extreme disappointment with the district’s model of distance learning.

The Cajon Valley Union School District, with its 29 elementary, middle, and special designation schools as reported by the California State Department of Education, has 16,666 of which 68.3% are identified as “socioeconomically disadvantaged”; 34.5 percent of its students are English learners.

What was supposed to be a one-hour special board workshop yesterday regarding the direction the district would take in anticipation of the future progress and/or possible spike in the COVID-19 pandemic turned out to be a five-and-a-half hour meeting where concerned parent-after-parent each objected to Miyashiro’s plans, which the board majority discussed at  Saturday’s secret meeting in Coronado.

ECM received an anonymous document dump of 26 electronic files on Sunday night, which detailed what was discussed at the meeting in Coronado.  Miyashiro and the board discussed the matter at yesterday’s meeting, punctuated by angry parents limited to speaking one at a time in the board room with other parents standing and waiting in the courtyard outside of the administration building as temperatures and tempers soared. 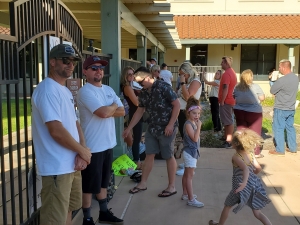 Many parents in the district opposed to Miyashiro’s plans also received the document dump of the internal documents.

Although the district provided a loudspeaker to broadcast the audio to the crowd of parents outside of the administration building, most of the meeting could not be heard due to severe technical glitches.

ECM was denied access to the board room where some of the board members and other district administrators and union heads participated by internet teleconference. ECM is consulting with First Amendment rights specialists over this apparent violation of our free press rights to access and record the meeting.

ECM has made a California Public Records Act request for the internet telecast. Jill Barto, who is on record on supporting the parents on limited use of distance learning technology, told ECM she was blocked from recording the Tuesday night meeting on her personal recording device as she has in the past at such meetings. A parent who asked to live-stream the meeting was also reportedly denied access.

Initially the board tried to block Barto, an elected trustee, from entering the meeting  but backed down when some 200 parents and others outside chanted "Let Jill in!"

The state of California has announced that schools can hold in-person classes this fall, with changes to protect children and teachers from COVID-19 by maintaining social distancing and hygiene standards. Some school districts have voiced concerns over higher costs for compliance.  Statewide and locally, many parents have objected to distance learning being continued for a variety of reasons. Some have returned to school and can't afford childcare. Others have limited English skills to help their children at home and/or have several children with limited computer access.  Others have objected to specific online curriculum concerns or other concerns.

As the meeting dragged on into the early evening hours, Miyashiro at one point reportedly declared that due to COVID-19, he did not need the board to make a decision affecting the future of in-person learning for students, Barto told ECM.  Citing the declaration, Miyashiro reportedly retorted, “you gave me emergency powers on Mar. 13. I could just decide this all by myself.”

After much discussing and finagling, the CVUSD board decided to meet on Thursday at 1 p.m. to come to a final decision on what school might look like for its students this coming fall. The action has drawn concerns from parents who object to being forced to wait outside amid sweltering temperatures without adequate access to shade, since only one person at a time will be admitted for public comments. A district teacher has also indicated that teachers received notification that they could face disciplinary actions if they attend the 1 p.m. meeting today, since this is during working hours per their union contract.