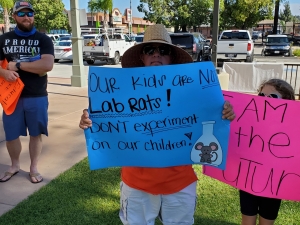 June 24, 2020 (El Cajon) -- The Cajon Valley Union School District Board of Trustees has approved a plan to re-open its 27 schools this fall, after going to a state-mandated distance learning program in March due to the coronavirus pandemic.

The final plan approved by the board on June 11, however, looks different from what had been envisioned by the district’s Superintendent, Dr. David Miyashiro. The original plan would have had students continue to use internet teleconferencing exclusively, as they have been since mid-March.

However, after documents from a private meeting involving some 40 district employees at the Marriott Coronado Resort and Spa on June 6 and 7 were leaked to parents and to East County Magazine, Miyashiro’s vision began to unravel. Some 100 parents throughout the district quickly organized and descended on school district headquarters on June 9 for what was supposed to be a one hour board workshop to approve the measure.

Districts across California face challenges returning to in-classroom learning due in part to social distancing requirements that could require smaller classes and more teachers at a time when the state faces budget challenges, as ECM recently reported. Options have ranged from staggered in-school schedules to continuation of distance learning to blended models.

In spite of efforts by Miyashiro and other CVUSD board members (except Jill Barto) to gather opinions and sell parents on Miyashiro’s post-COVID vision during May, after listening to parent-after-parent and their children complaining loudly during the public participation portion of the regular board of trustees meeting, the board began to consider alternatives to Miyashiro’s plan.

Toward the conclusion of the meeting, Miyashiro stated that the board had given him emergency powers in mid-March due to COVID-19 and that “technically we don’t need board approval,” in other words, suggesting he could order the future education of all district children by himself. ( (Click to hear audio of full evening meeting; Miyashiro statement is just after 2:18) 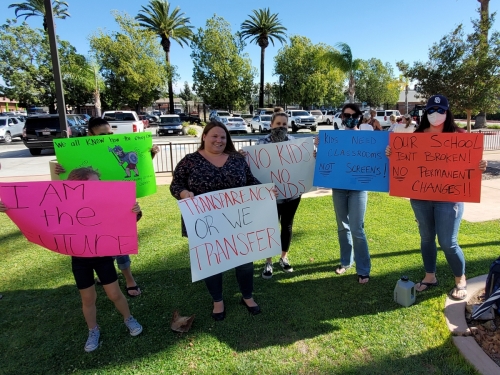 The board then agreed to meet again on Thursday afternoon, on June 11, much to the consternation of Miyashiro, who later apologized over his earlier angry words. He said to ECM and 10News after the board vote, “I’ve been putting in a 70-80 hour work week which includes the weekends. And it has created a bad example for the staff who are doing the same. I’ve been working that hard it really limits your ability to be your best self as I apologize for that. I also apologize for losing my patience at times and wanting to move things quicker than normal.”

ECM attempted to ask Miyashiro if he had truly intended to invoke his power to make an executive decision, but he ignored the question as he stormed away and slammed the door, going back into the confines of the district administration building.

A common fear expressed among parents is that the new structure would eventually become permanent, following Miyashiro’s vision to change education with the focus on online learning.

Miyashiro also said during the 10News and ECM interview, “Beginning immediately we are surveying our families and our teachers about their interest in summer work and also coming back to school in the fall.”

He blamed the disgruntled attitude of local parents on the effects of the in-house lockdown on the pandemic rather than the merits of his original vision.

“I think that all of us have been suffering from the pandemic. Not being able to have, for us, the children on our campus. It’s hard to teach without the joy of children in your presence. And for the students it is hard to learn without the human connection – not only for the teacher but your friends – the other kids,” Miyashiro told 10 News.

Leona Abbo, a parent with two children in the district, told NBC San Diego journalist Rory Devine, “We want to go back to a traditional classroom setting with a live teacher in front of them [students] just like pre-COVID.” She added, “Our kids are falling apart. They don’t want to do homework. They are mentally falling apart.”

The San Diego County Office of Education a week ago announced that schools are to be open this fall, but that all may change with recent spikes in the number of COVID-19 cases throughout the county.

Copyright ©2020 by PaulKruzeLive.com, All Rights Reserved.