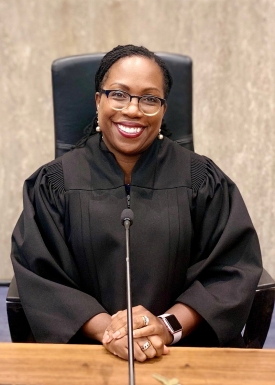 April 7, 2022 (Washington D.C.) – The U.S. Senate voted 53-47 today confirm Judge Ketanji Brown Jackson to the U.S. Supreme Court, the first Black woman named to the nation’s highest court. Jackson, a descendant of slaves, received the support of all 50 Democrats as well as Republicans Mitt Romney of Utah, Lisa Murkowski of Alaska, and Susan Collins of Maine.

Kamala Harris, former California Senator and the first Black woman to serve as Vice President, presided over the historic vote. Harris told reporters afterword that she felt “overjoyed, deeply moved,” adding, “I do believe it is a very important statement about who we are as a nation, that we have just made a decision to put this extraordinary jurist on the highest court of our land.

View video of standing ovation when Judge Jackson was confirmed in Senate: https://www.cnn.com/videos/politics/2022/04/07/ketanji-brown-jackson-con...

California’s current Senators, both Democrats who voted in favor, also praised the action. Senator Alex Padilla posted on Twitter, “Today marks an inspiring, and long awaited, milestone for the United States of America.”

Senator Dianne Feinstein called today “a great day for our country” and noted that the nomination also gives the Supreme Court near-gender parity for the first time in 233 years, with four women on the bench. She added, “The Supreme Court should look like the country it serves, and with this confirmation, we move closer to that ideal.”

Feinstein also praised Jackson’s conduct during often tense confirmation hearings, noting, “She displayed an exceptional legal mind, impeccable integrity and a commitment to impartiality – qualities that will make her an outstanding justice. Beyond her qualifications, I was most impressed with her deep understanding that the Supreme Court isn’t an academic body, but an institution that affects all Americans with its decisions.  That respect for the role the law plays in people’s lives will serve her well as she joints the court.”

The confirmation was opposed by most Republicans.  Republican Minority Leader Mitch McConnell of Kentucky said he sees “hallmarks of judicial activitism in Judge Jackson’s record” explaining why he intended to vote no shortly before the roll call.

Senator Collins, the first Republican to announce her vote in favor, voiced gratitude to Murkowski and Romney for joining her in a bipartisan vote.  I think that’s important. It used to be that that was very common when it came to a Supreme Court justice.”

Justice Jackson will fill the vacancy to be left by the retirement of Justice Stephen Bryer, a liberal for whom she previously served as clerk on the Supreme Court. Her confirmation is not expected to change the 6-3 conservative control of the Supreme Court. But she willl bring fresh perspectives, as not only the first Black woman to hold the position, but also the first public defender.

Most recently, she has served as a federal appellate judge on the U.S. Court of Appeals for the District of Columbia Circuit Court, until her elevation to the Supreme Court through nomination of President Joe Biden and today's Senate confirmaton.

Born in Washington D.C. and raised in Florida, Jackson graduated from Harvard University’s law school and served as editor of the Law Review before serving three judicial clerkships, one with Justice Breyer.  She worked as a public defender and later served as a district judge for the U.S. District Court in Washington D.C. before being named to the appellate court. She also served as vice chair of the U.S. Sentencing Commission, appointed by President Barack Obama.

She is married to Patrick Graves, a surgeon who is a descendant of Continental Congress delegate Jonathan Jackson and related to both former Supreme Court Justice Oliver Wendell Homes and former House Speaker Paul Ryan.

see the right wing tRumpers walk out of the senate after the vote. just shows they care about party over country!!!! they are just a bunch of racist bigots!!!!