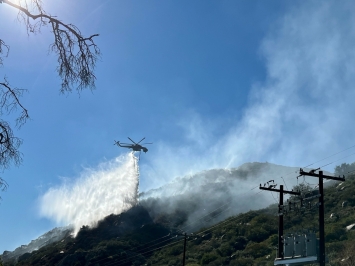 January 24, 2022 (Lakeside) -- The #CanyonFire that began with a vehicle fire at Wildcat Canyon and Muth Valley roads in Lakeside has forced closure of Wildcat Canyon Road in both directions from Willow to Barona. As of 3:30 p.m., Cal Fire spokesman Frank LaCoco told ECM he anticipates closure for at least two more hours due to equipment on both sides of the road, with firefighters remaining on scene into the evening.